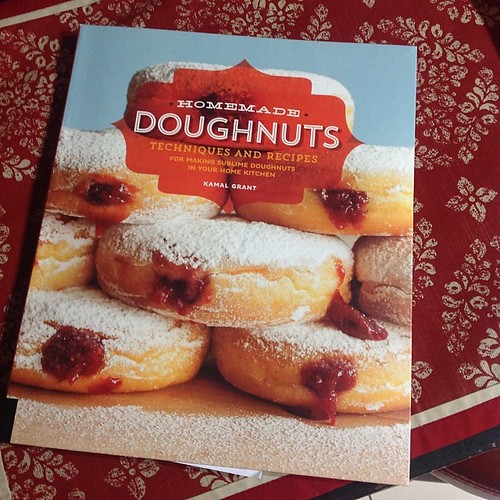 Lately doughnuts have been having some sort of a renaissance like Matthew McConaughey.  Is it a dougnaissance?! Places like Dough in Brooklyn, Federal Donuts in Philadelphia and Voodoo Doughnut in Portland have put doughnuts back on the map. The things that attract people to these places is their creative flavors and offbeat ingredients.

Now the artisan doughnut trend has reached Atlanta.  I first experienced Sublime Doughnuts last summer for my sister's birthday. They were amazing!  Now, I  got a copy of Kamal Grant's cookbook, Homemade Doughnuts: Techniques and Recipes for Making Sublime Doughnuts in Your Home Kitchen.

Inside the cookbook there are recipes for cake doughnuts, gluten-free doughnuts and yeast doughnuts. Plus there icings, fillings and a recipe for funnel cake.

Homemade Doughnuts is one of my favorite cookbooks so far this year.  I like cookbooks that not only have great recipes but also inspire me to create my own alternate versions. Also, if you are cookbook shopping for a baker, check out Surprise Inside Cakes by Amanda Rettke.
Atlanta cookbooks donuts doughnuts kamal grant sublime doughnuts