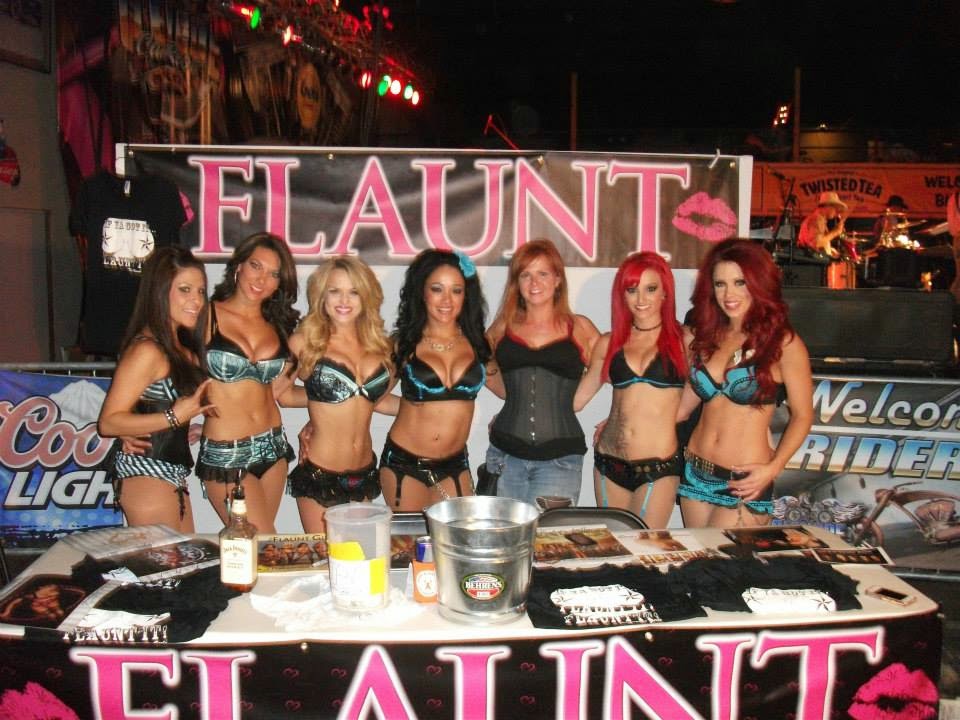 Through my passion for cupcakes, I've had many great adventures and celebrity encounters.  I've also made more than just a few friends (cupcakes bring people together, dontcha kno?!).  In this blog entry, I'm going to let cupcakes tell the story of how I came to be friends with the world-famous, talented, amazing and beautiful Flaunt Girls! They are a unique "rock cirque" group that performs a kind of burlesque circus concert with silks, fire, snakes, hoops and more.
My husband and I, like so many others, had seen the Flaunt Girls on TruTV performing at the Full Throttle Saloon in Sturgis and even had our picture taken with them a couple of times at local bike shows and at FTS once when we were there, but the first time we actually met them, I had just opened my business about 6 months before they were coming to town to do the Wide Open Magazine Motorcycle Show in Kansas.  My husband and I always attend that show and it was his idea that I bring them some cupcakes...I may have gotten a little carried away: 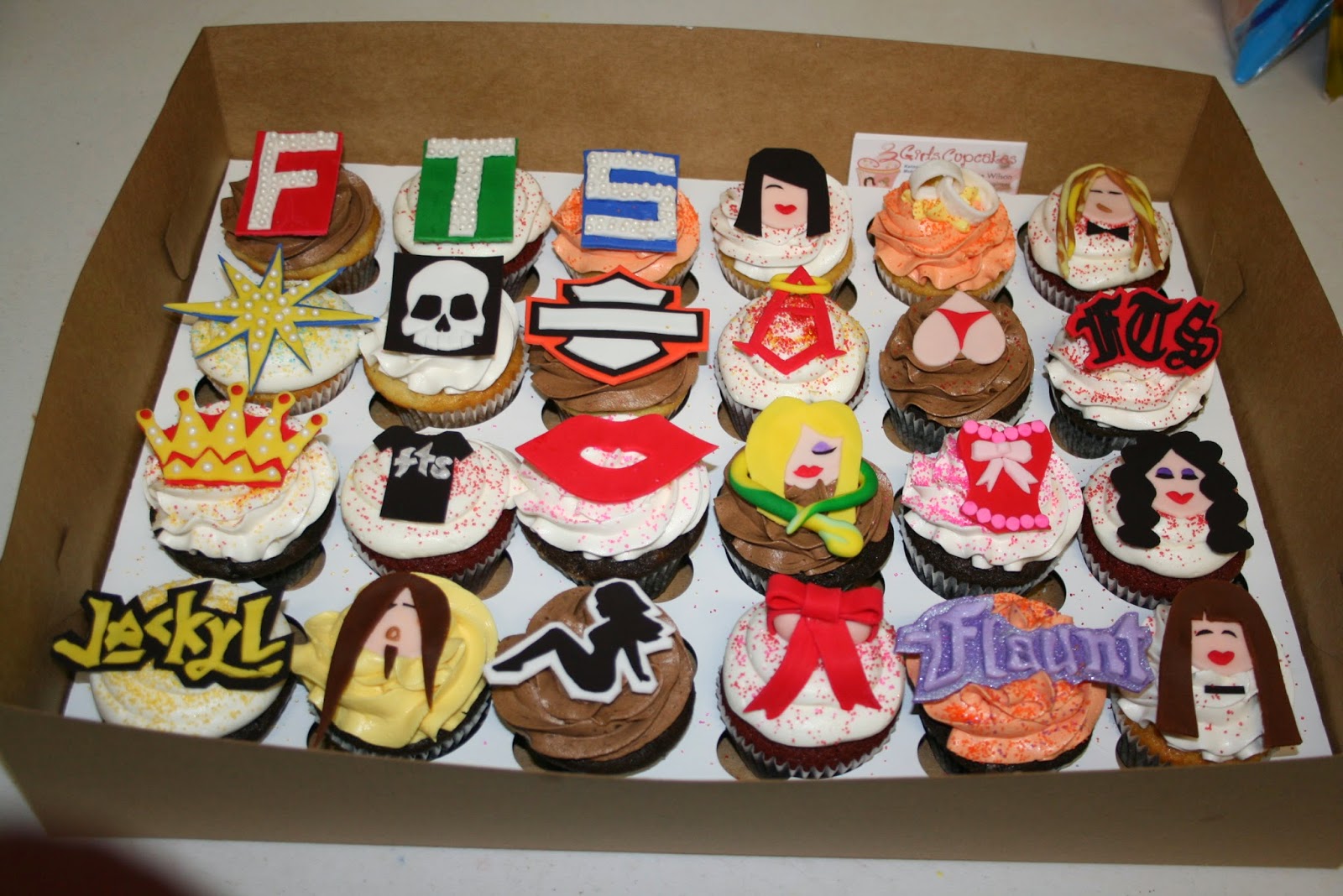 I delivered the above cupcakes depicting the scenes and people of Flaunt and the Full Throttle Saloon the afternoon before the show and went home to get ready to attend the show with my husband that evening.  Then pictures like these started showing up on Twitter: 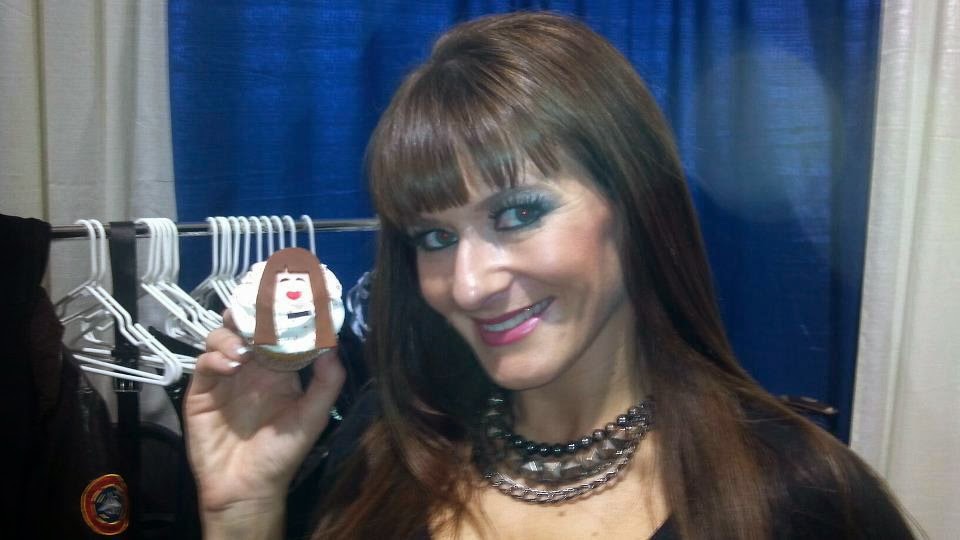 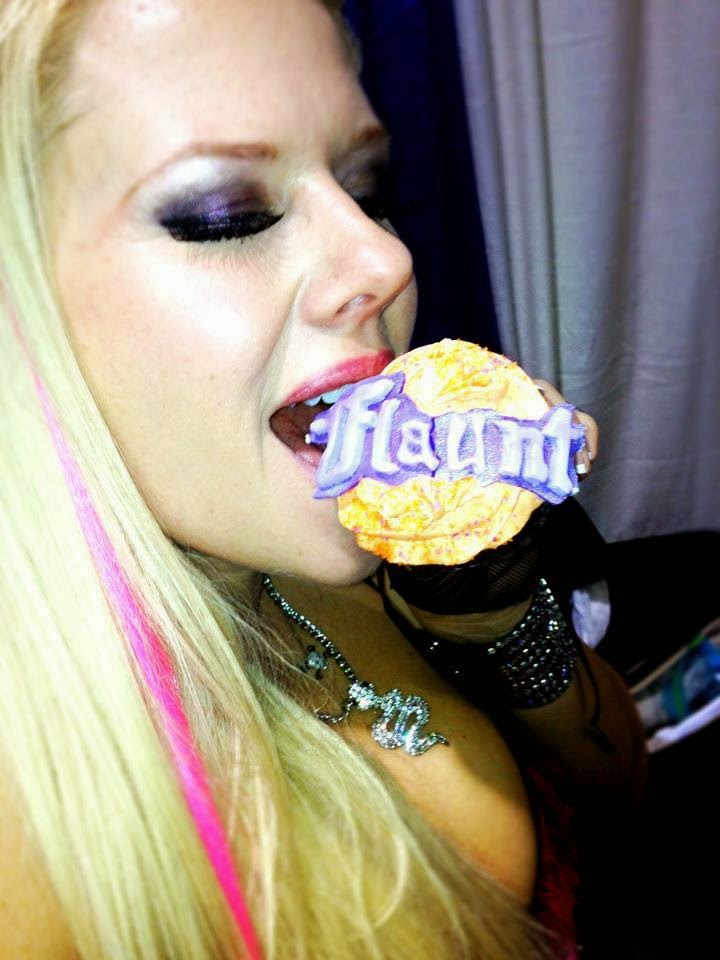 We went to the show, met everyone and had a great time.  At the show, we learned everyone's favorite flavors and that they were fighting over who got to eat what flavor and what decoration and had fun with it all.  At the show, we met a couple of Flaunt Girls we hadn't seen before and didn't want them to feel left out since I hadn't made little fondant versions of them, so I went home and made these and brought them the next day, along with a "Holy Catfish!" cupcake for Angie: 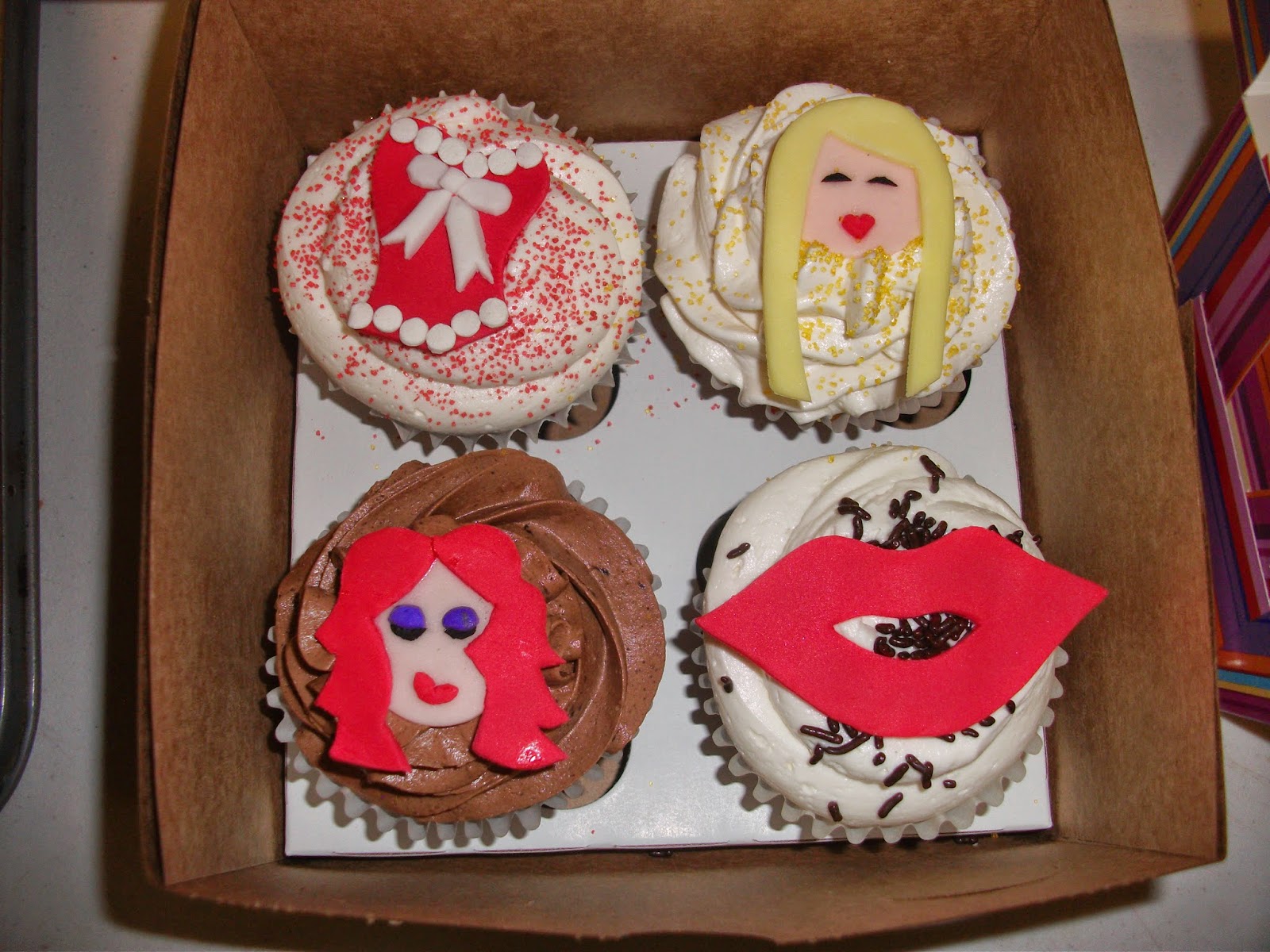 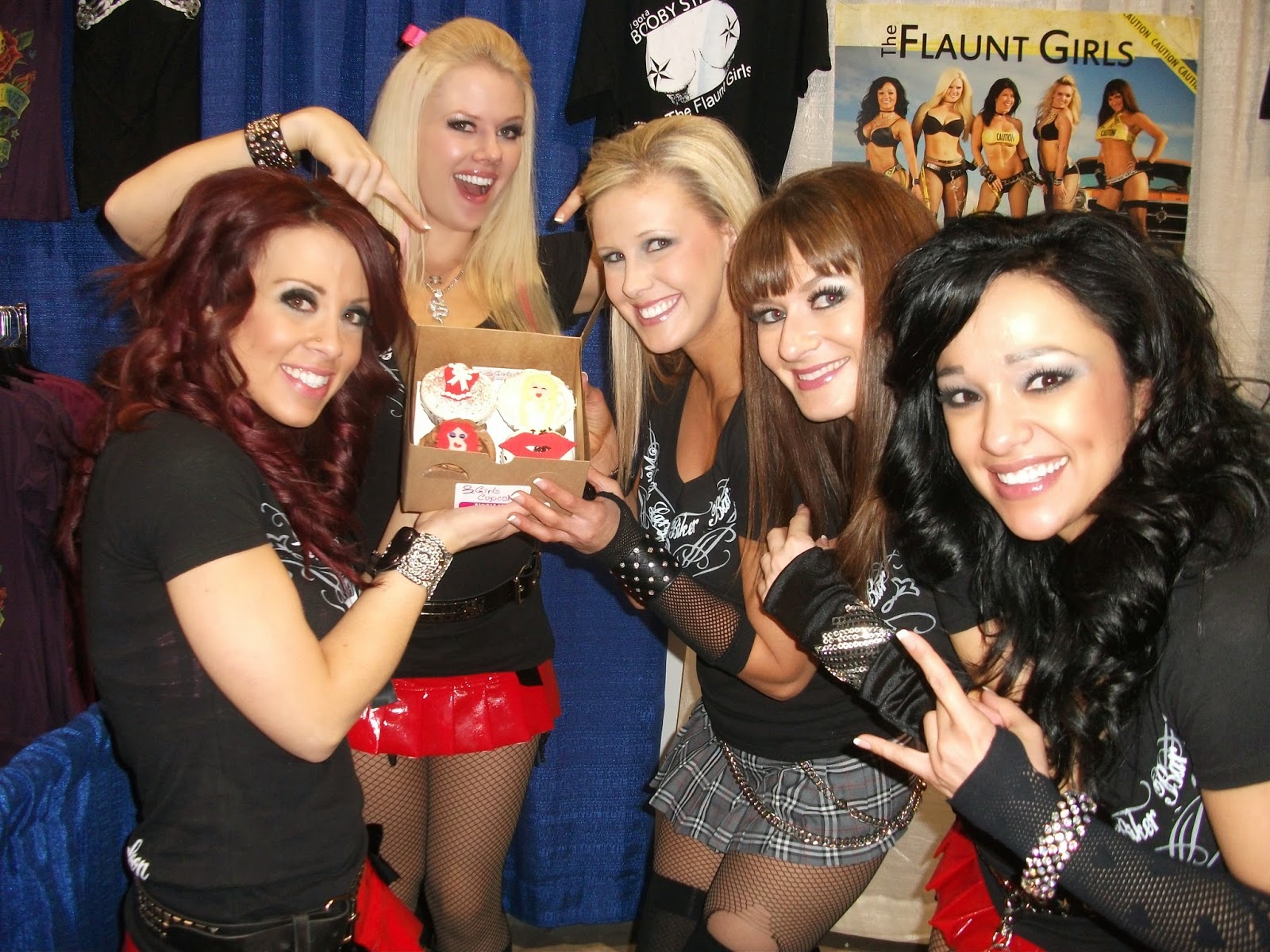 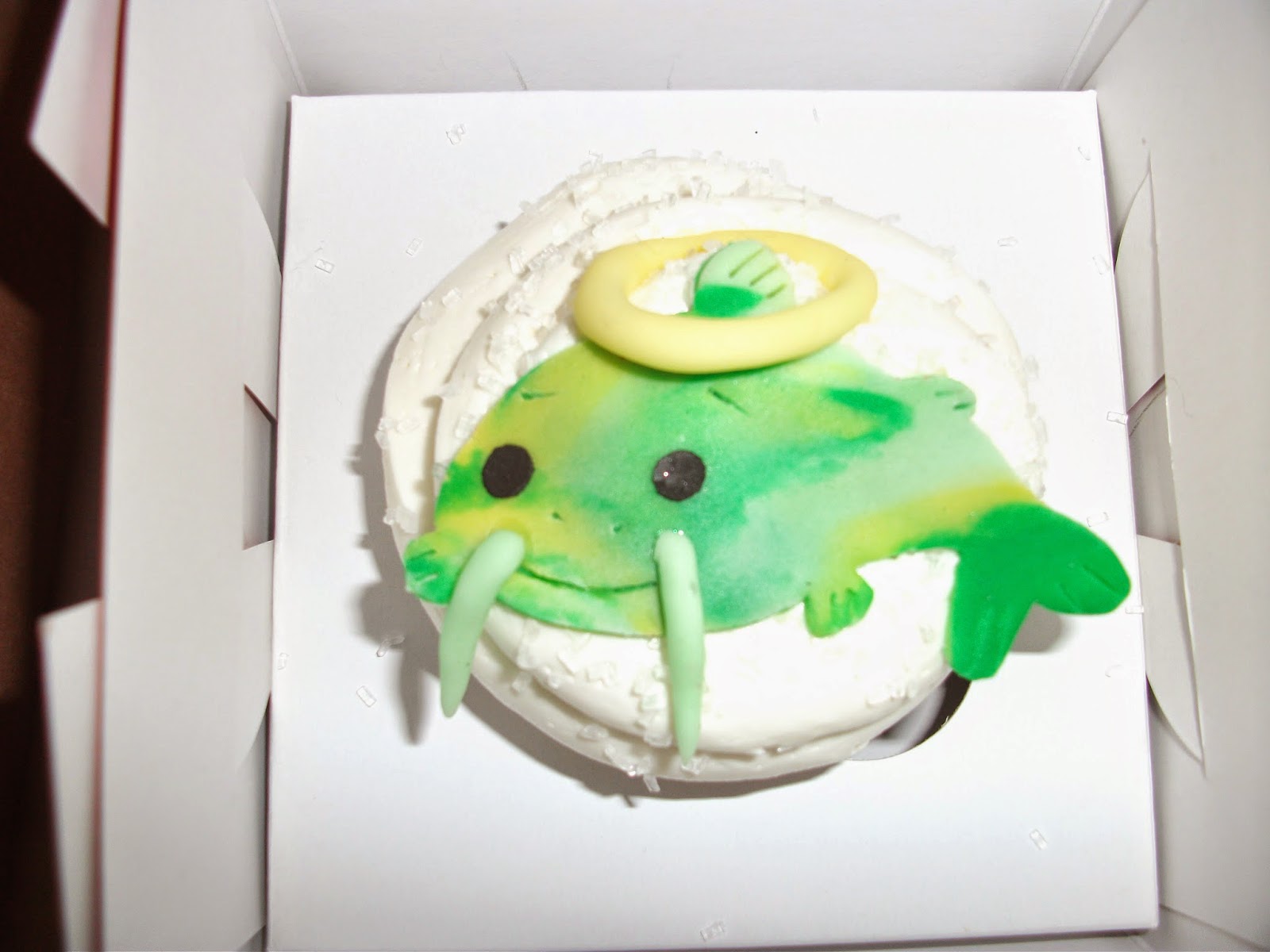 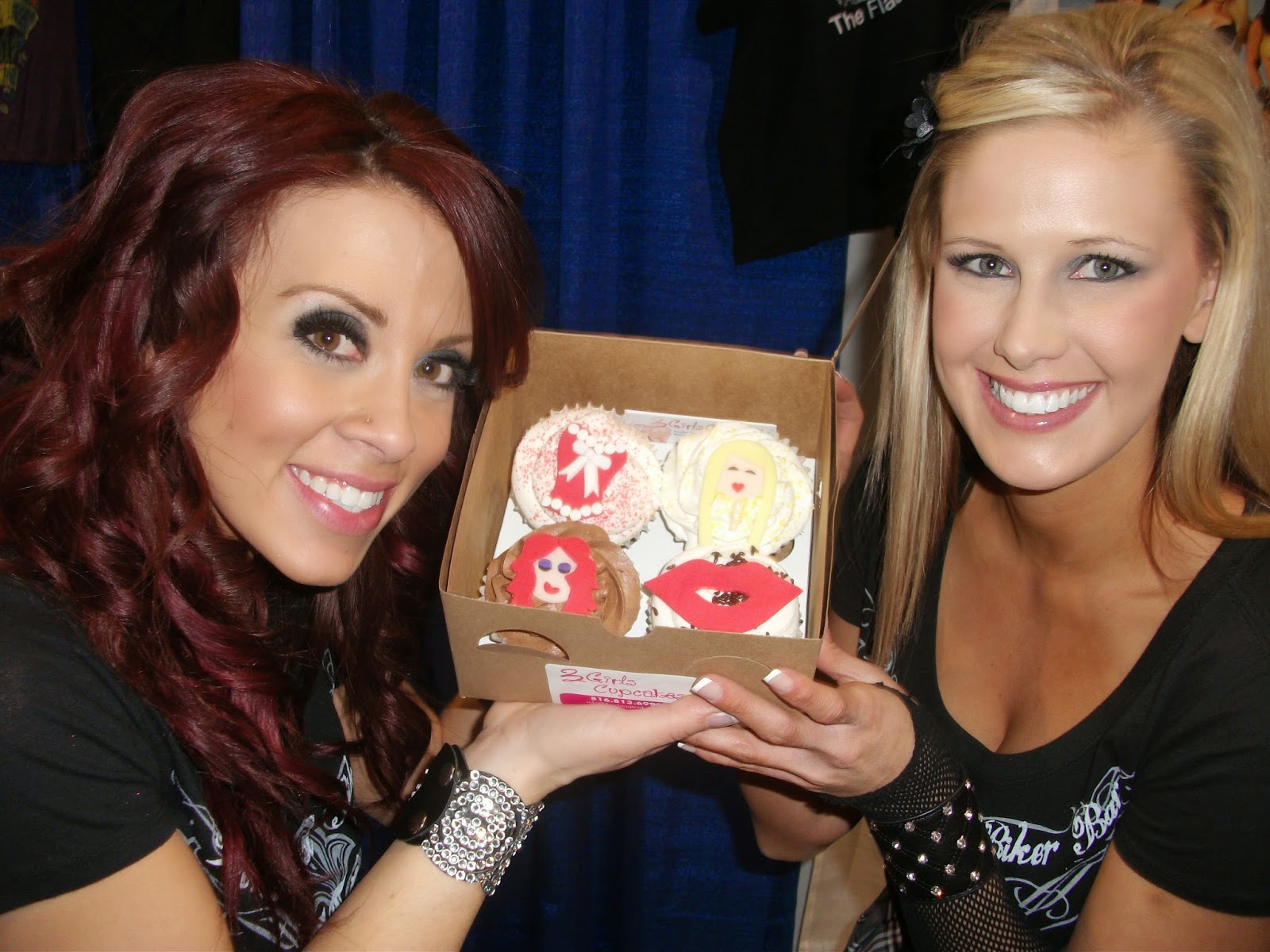 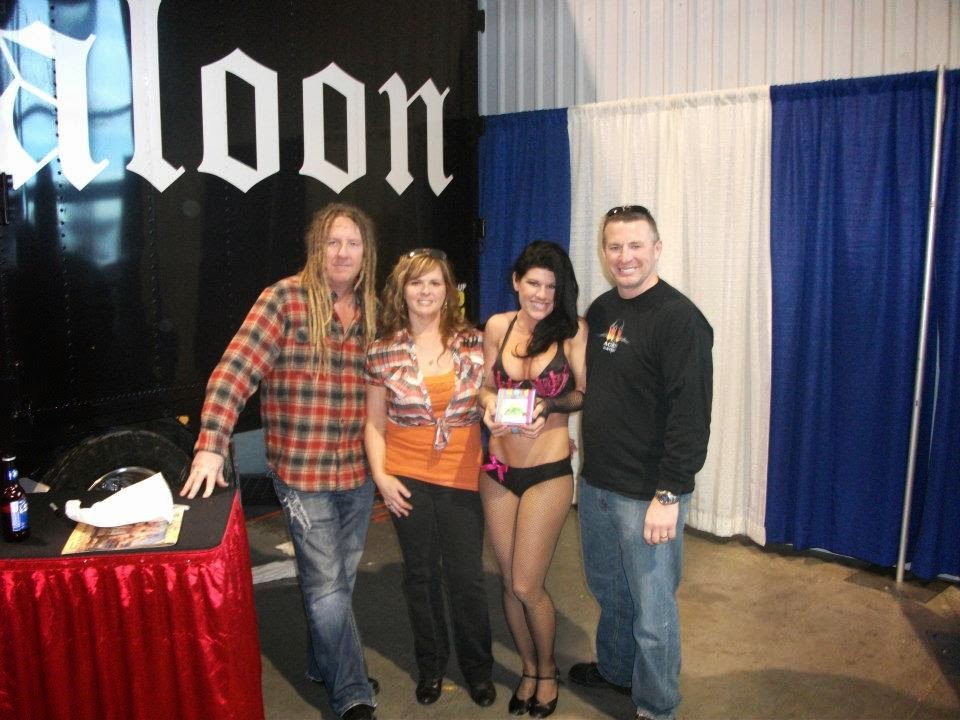 Through that experience, we learned that not only do Flaunt Girls (like most girls, really) love cupcakes, but they are really sweet and so we stayed in touch with them, looking for ways to cross-promote our businesses...which we did by buying advertising space in the back of that year's Flaunt calendar: 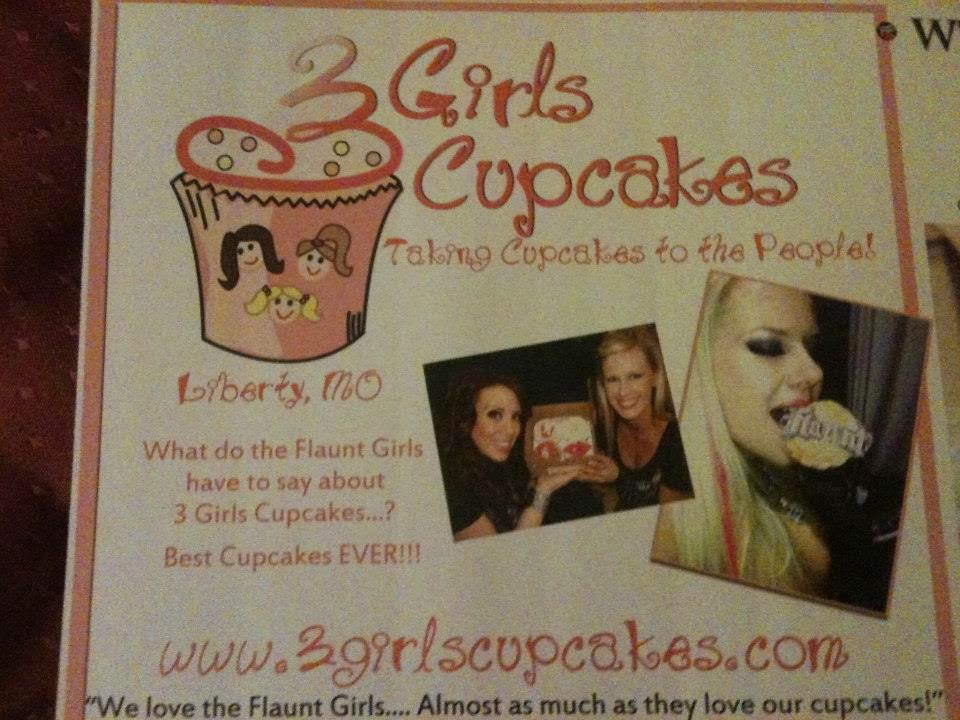 The next time we encountered the Flaunt Girls (with cupcakes in hand) was at the Full Throttle Saloon at the Sturgis Motorcycle Rally itself later that same year.  We had coordinated with the girls all summer on where they would be and when, so we timed our drive up there to be there in our truck on the way into town (cupcakes do NOT travel well on a motorcycle, I've tried it!). 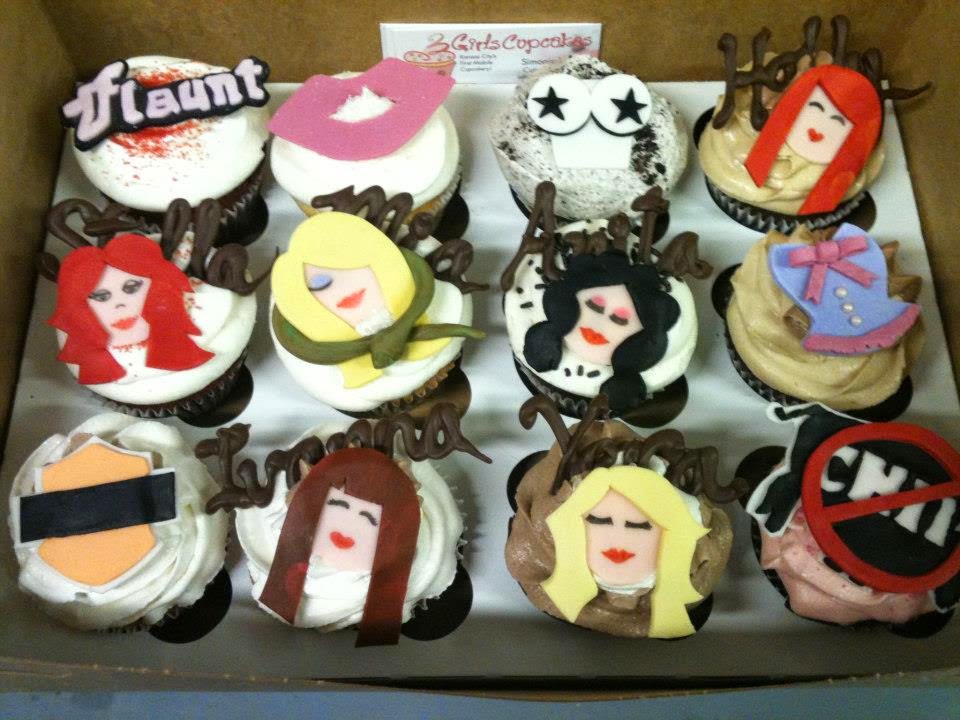 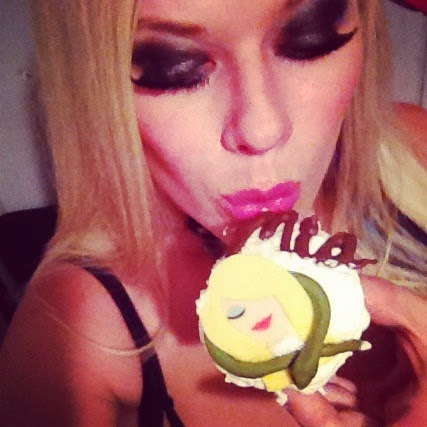 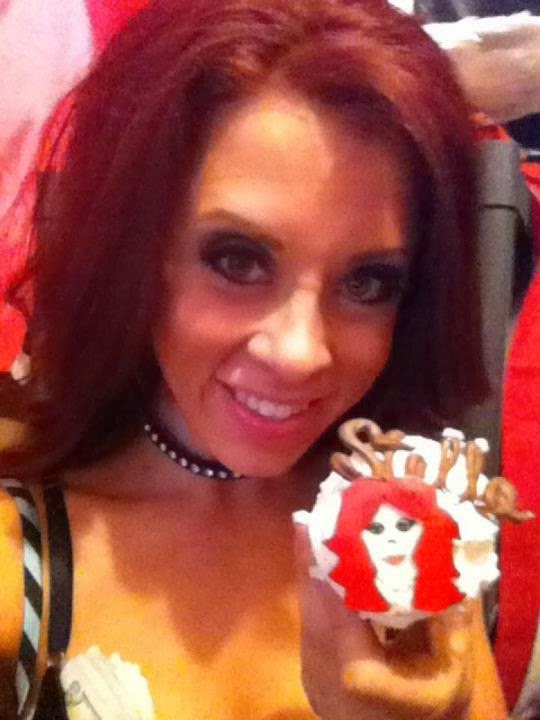 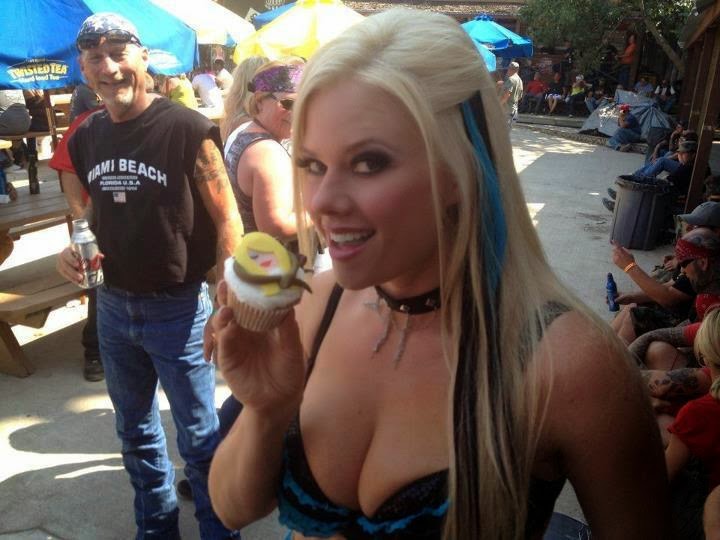 That summer, we had also experimented with Jesse James Dupree's new line of beers and whiskeys and come up with an awesome concoction over the summer and sent him pictures and he told us to bring some to him at the Full Throttle too, so we did!  He has a camera crew following him around constantly, so he filmed a whole interview with us eating cupcakes and doing shots LOL!  Then he had us go next door and shoot one of those old timey photos with him and the results are below.  Yes, it was a crazy, surreal experience to say the least. 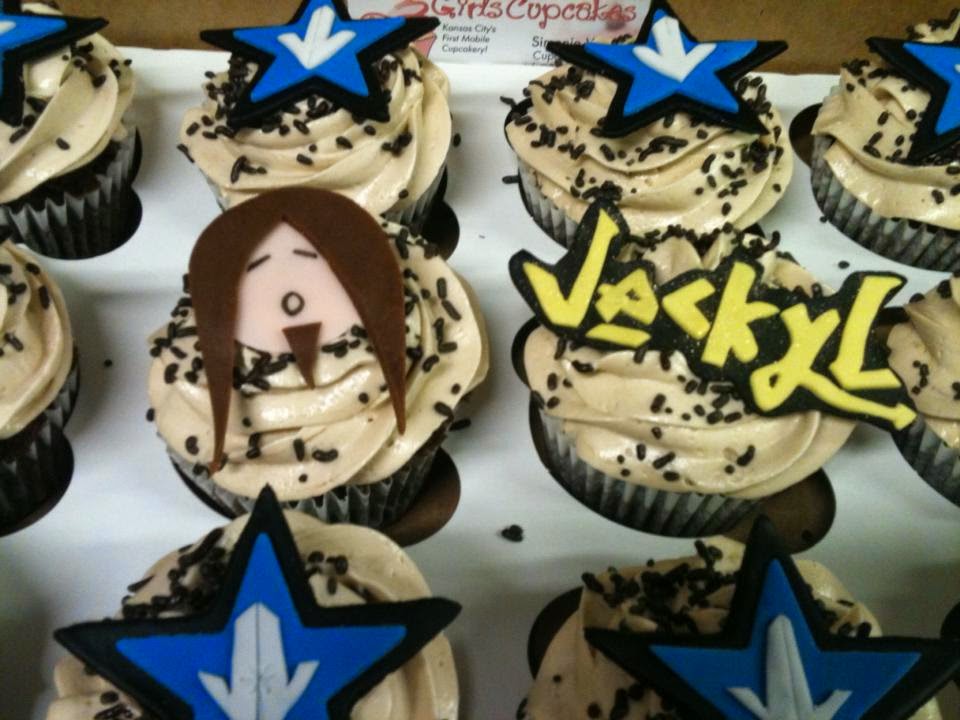 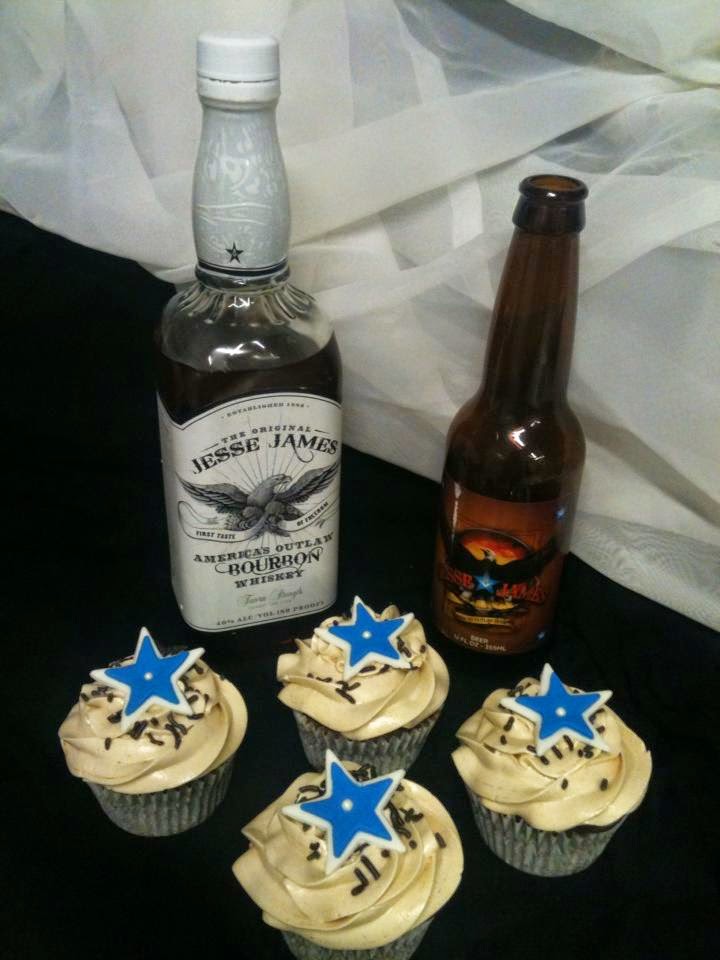 Unfortunately, the interview didn't make it to TV, but one of our boxes of cupcakes did: 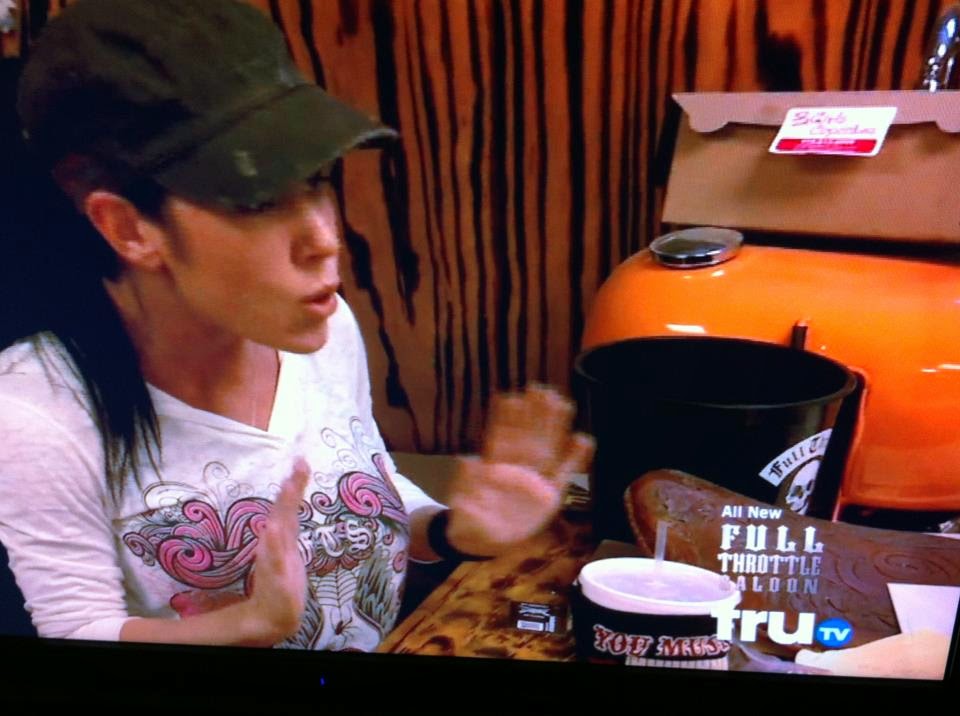 You can see our box in the upper right hand corner of one entire episode.  This is what was in that box when we delivered it: 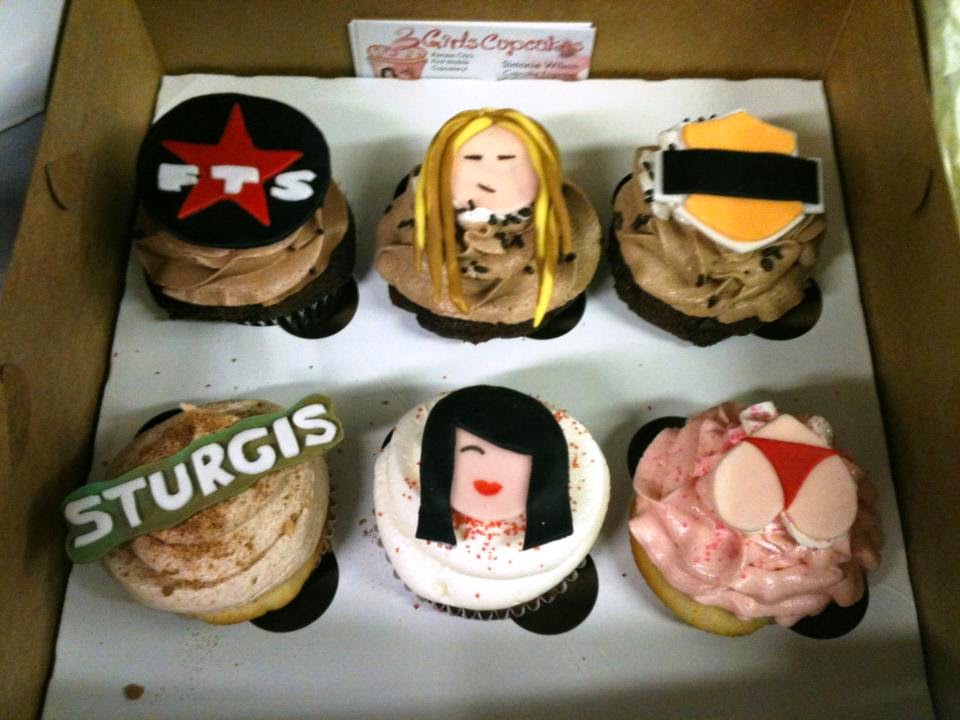 Even a couple of our favorite biker friends got cupcakes that year (bikers love cupcakes, the softies!): 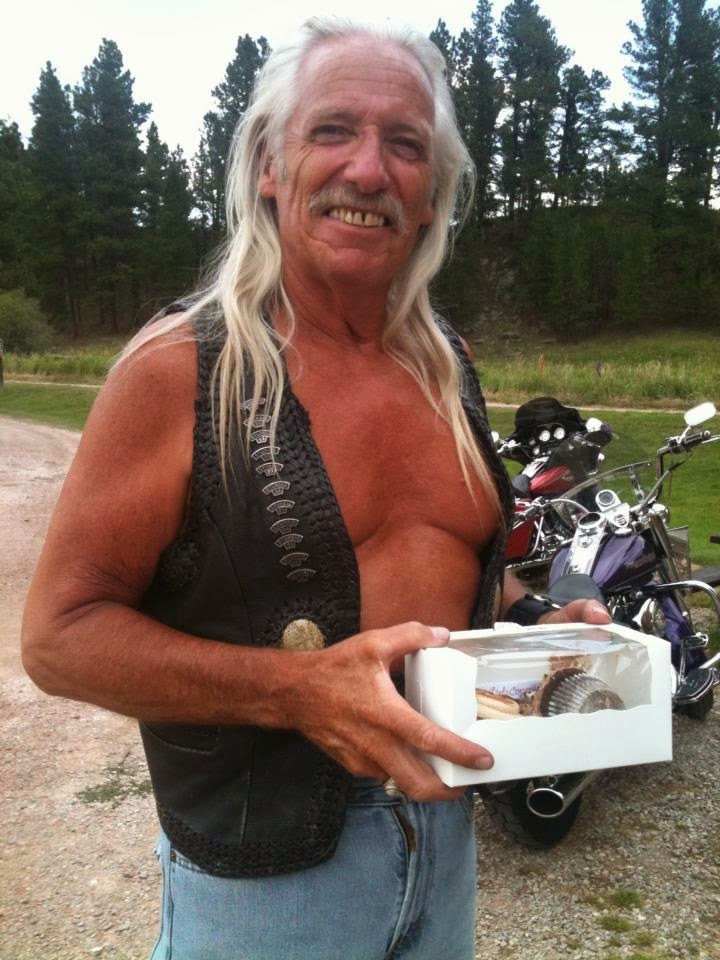 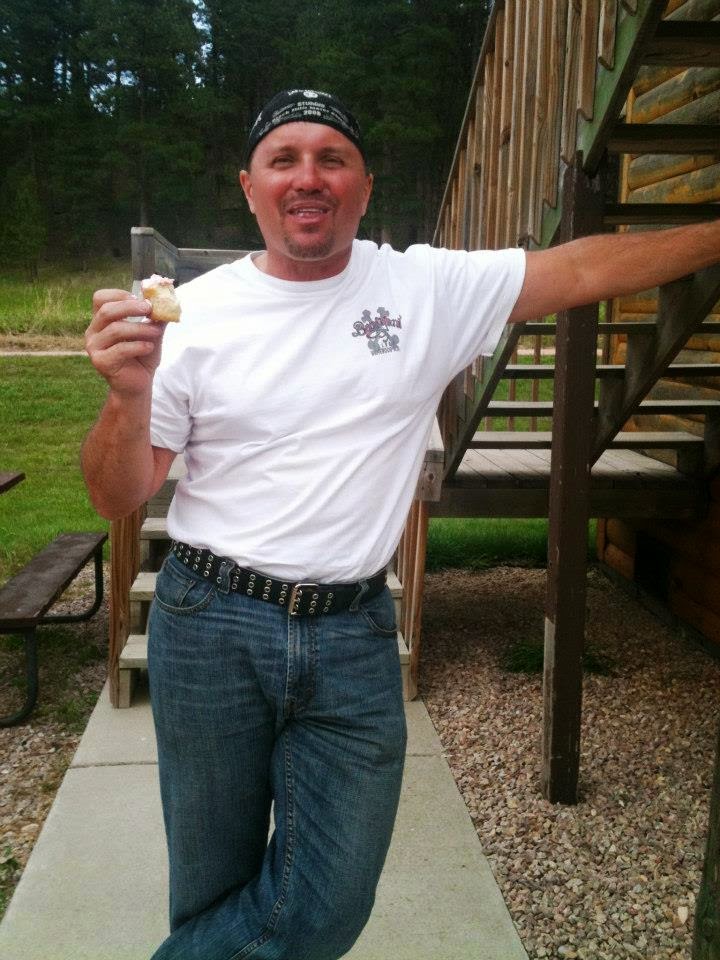 Our more recent Flaunt adventures have been closer to home in the Kansas City area.  Once last year they were passing through between shows and we met them for dinner...with cupcakes. 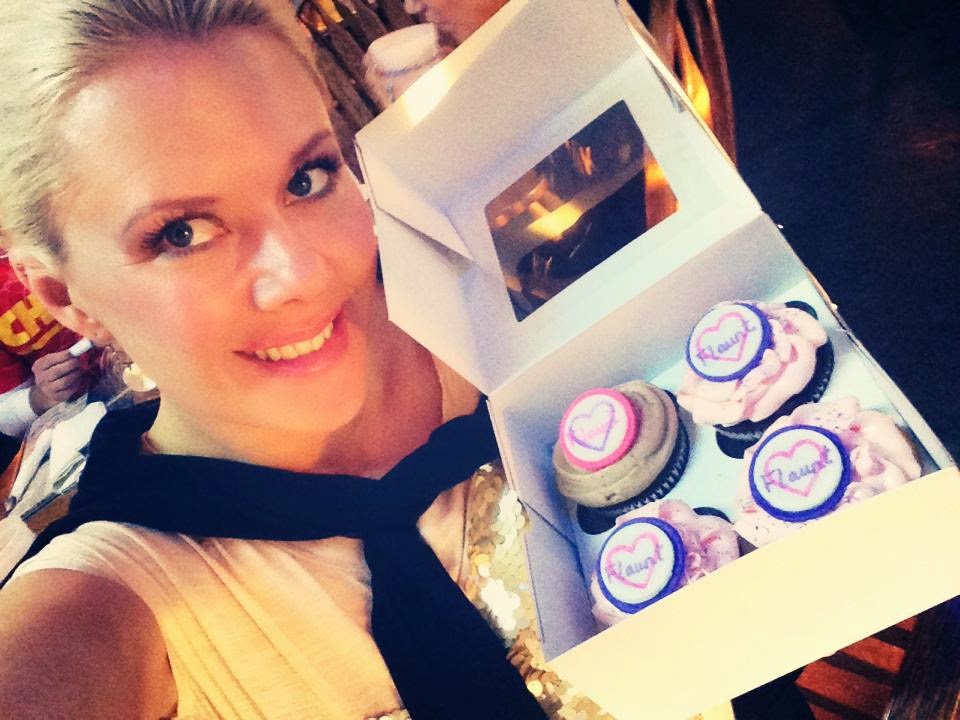 Then at the Wide Open show this year, Flaunt couldn't make it, but I coordinated with Mia Big Tease to bring some special cupcakes for Mike, Fajita and Jesse James of FTS as part of an inside cupcake joke (yes, that's a thing ;) ): 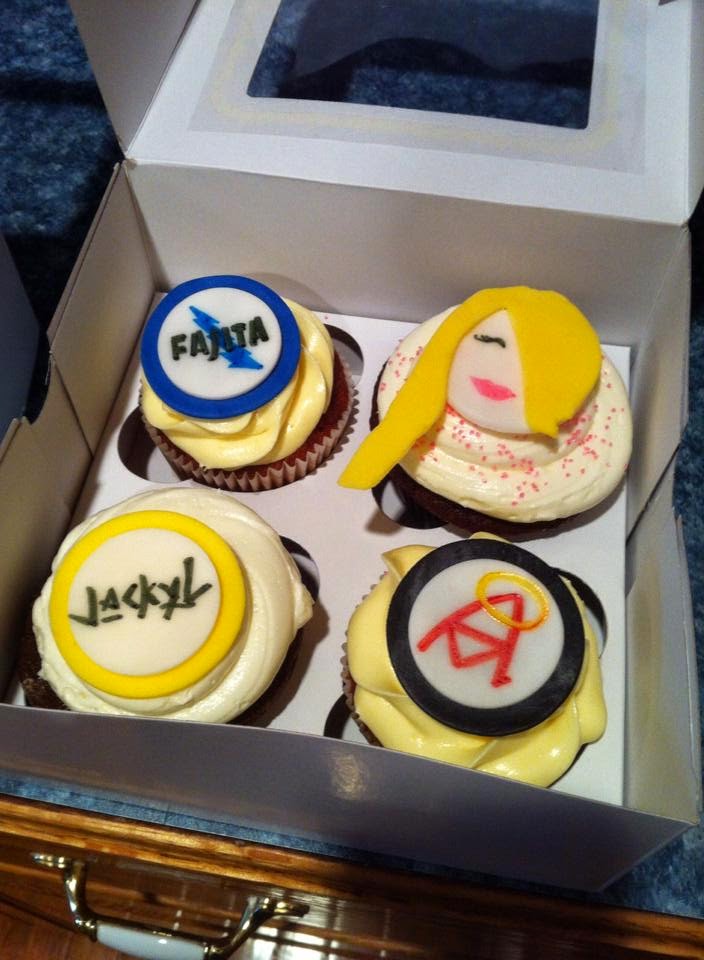 Which brings me to our latest (and greatest) Flaunt-tastic adventure to date and the reason I finally got around to blogging about our flamboyant friends and their love of cupcakes.  I helped arrange a couple of KC gigs for them (finally!) and my husband and I followed them around and helped them out all day.  What a crazy day/night!  We had so much fun and everyone we worked with was so professional and supportive.  We wouldn't hesitate to help out again!  ...And the night ended with what else? CUPCAKES!! 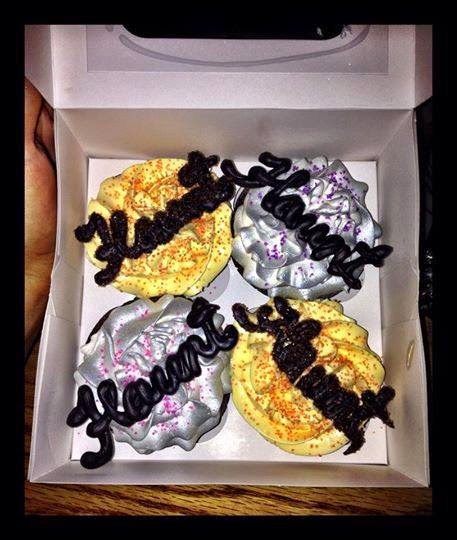 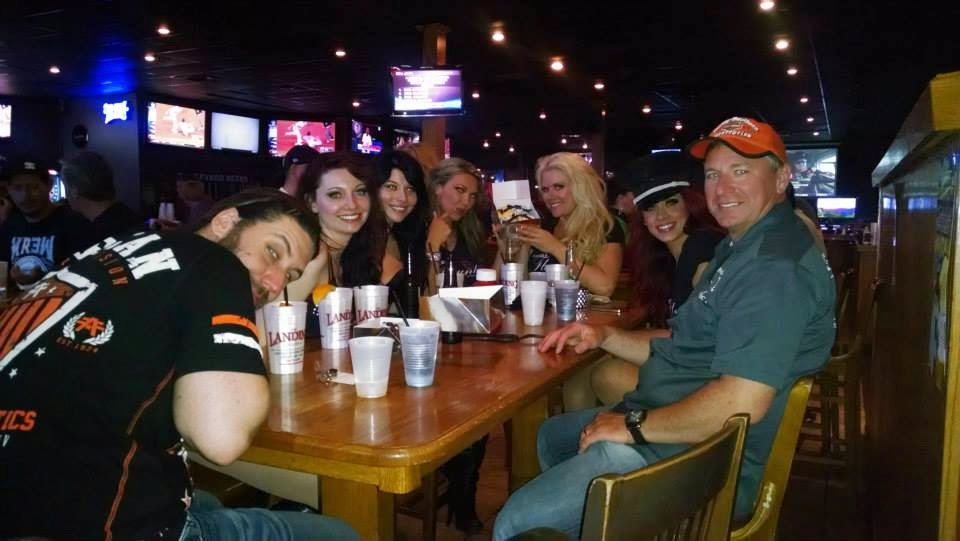