MY visit to Sprinkles (finally!) and a little place called Disneyland

Posted by Unknown on July 15, 2014
So I finally got to eat a Sprinkles cupcake, and from the original location and the original ATM, no less!  Herein, I will painstakingly chronicle the entire pilgrimage for you all, if you are cupcake fanatic enough to stick with me... 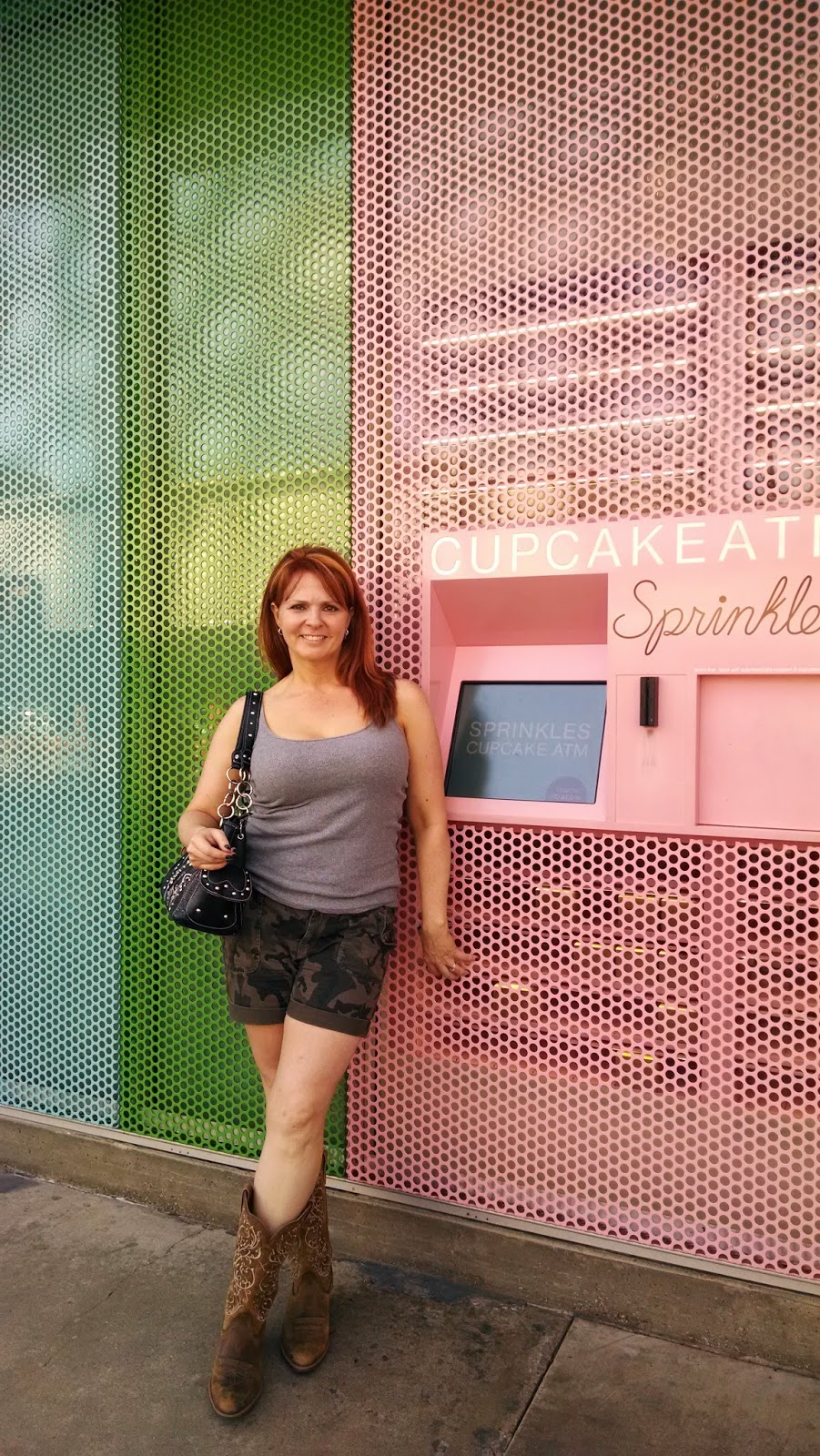 My adorable daughter humored me when I told her there was an ATM, so I let her take the reigns.  First, she deftly maneuvered the simple touch interface.  Every flavor was available on the menu except for the daily specials, though there was no information displayed to let us know that. 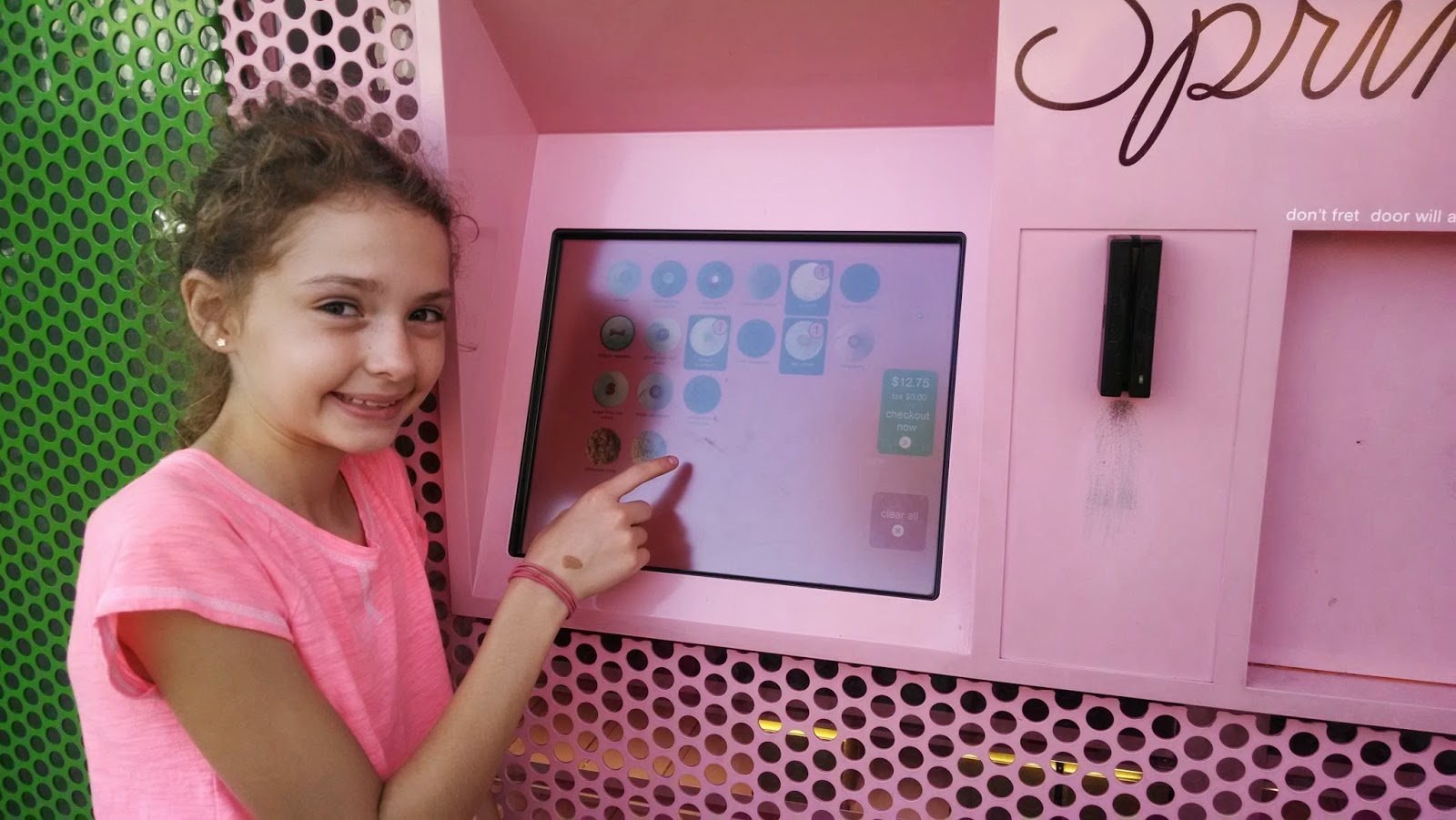 Then she waited patiently, perhaps 2 minutes while it processed our order. 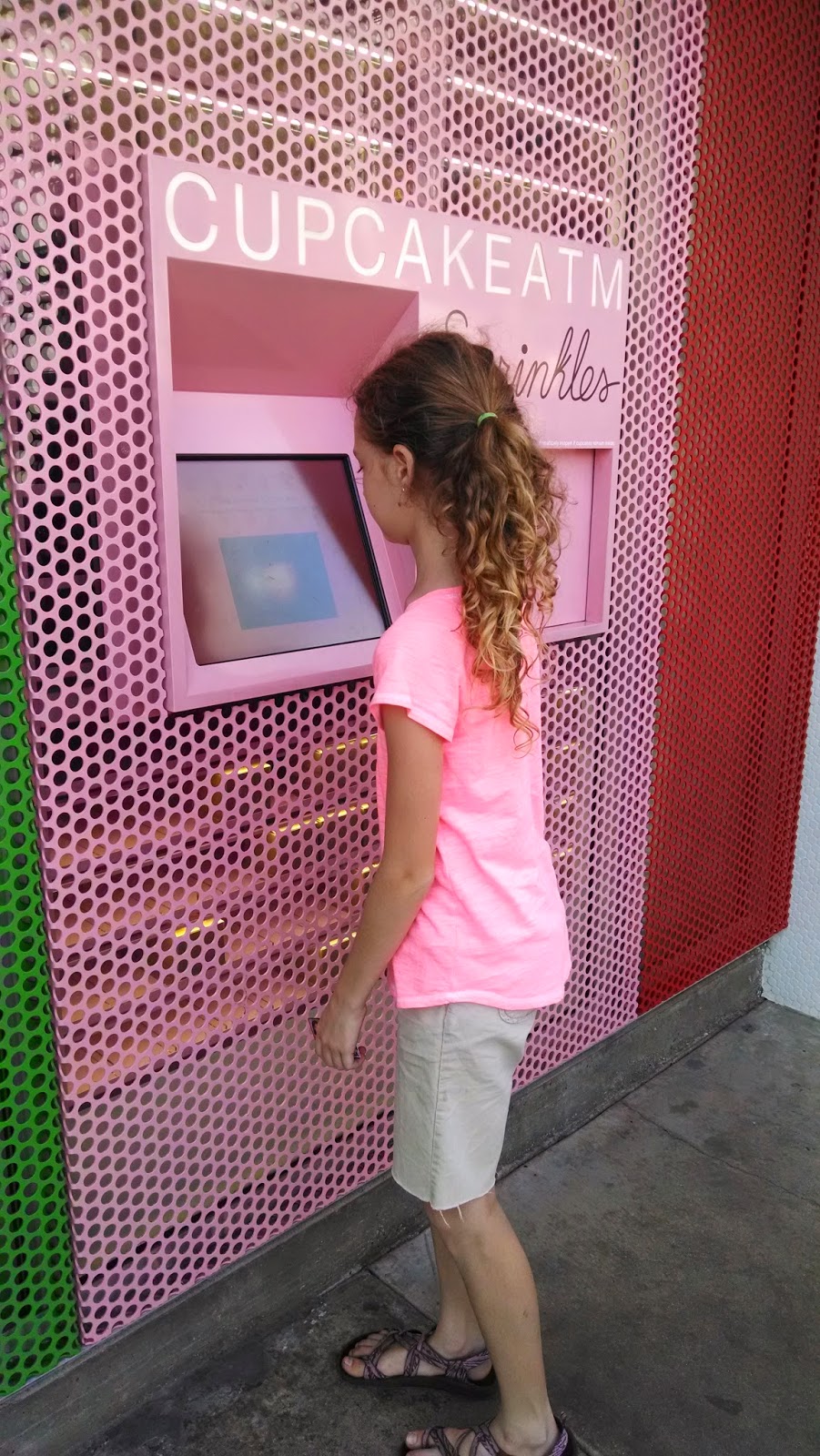 She was fascinated by the storage below the machine, but we couldn't tell exactly how automated it was.  Maybe if we came back at 2am, we could see a mechanical arm or a person's arm for that matter. 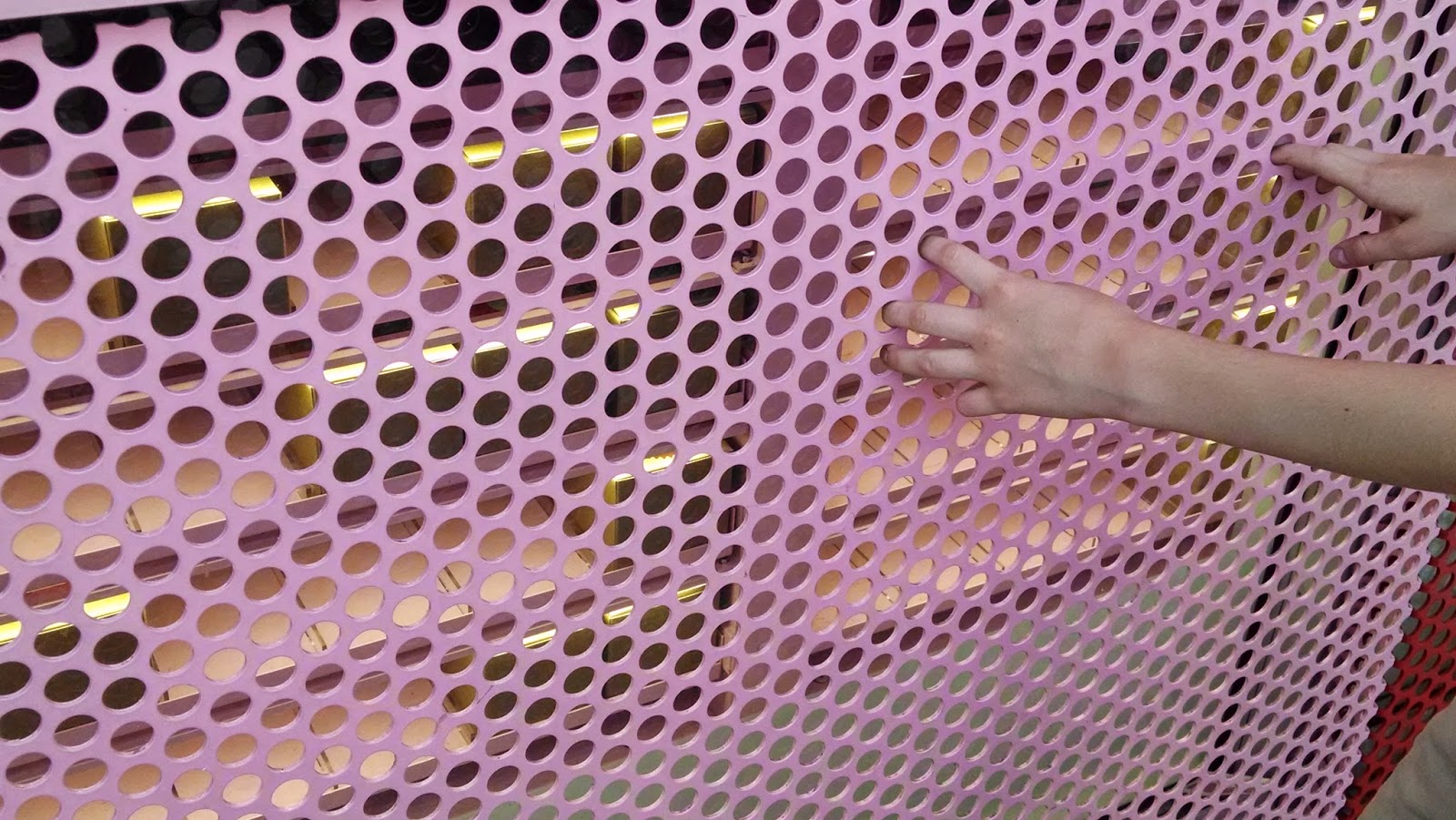 The door eventually slid open and Tada! Cupcakes!  (There really should have been gospel music playing or some kind of trumpets sounding when it opened).  We had ordered 3 cupcakes from the ATM, knowing we would also be going in to have the full experience, but there was barely enough time to snap a picture and grab the cupcakes before it closed on our hands. 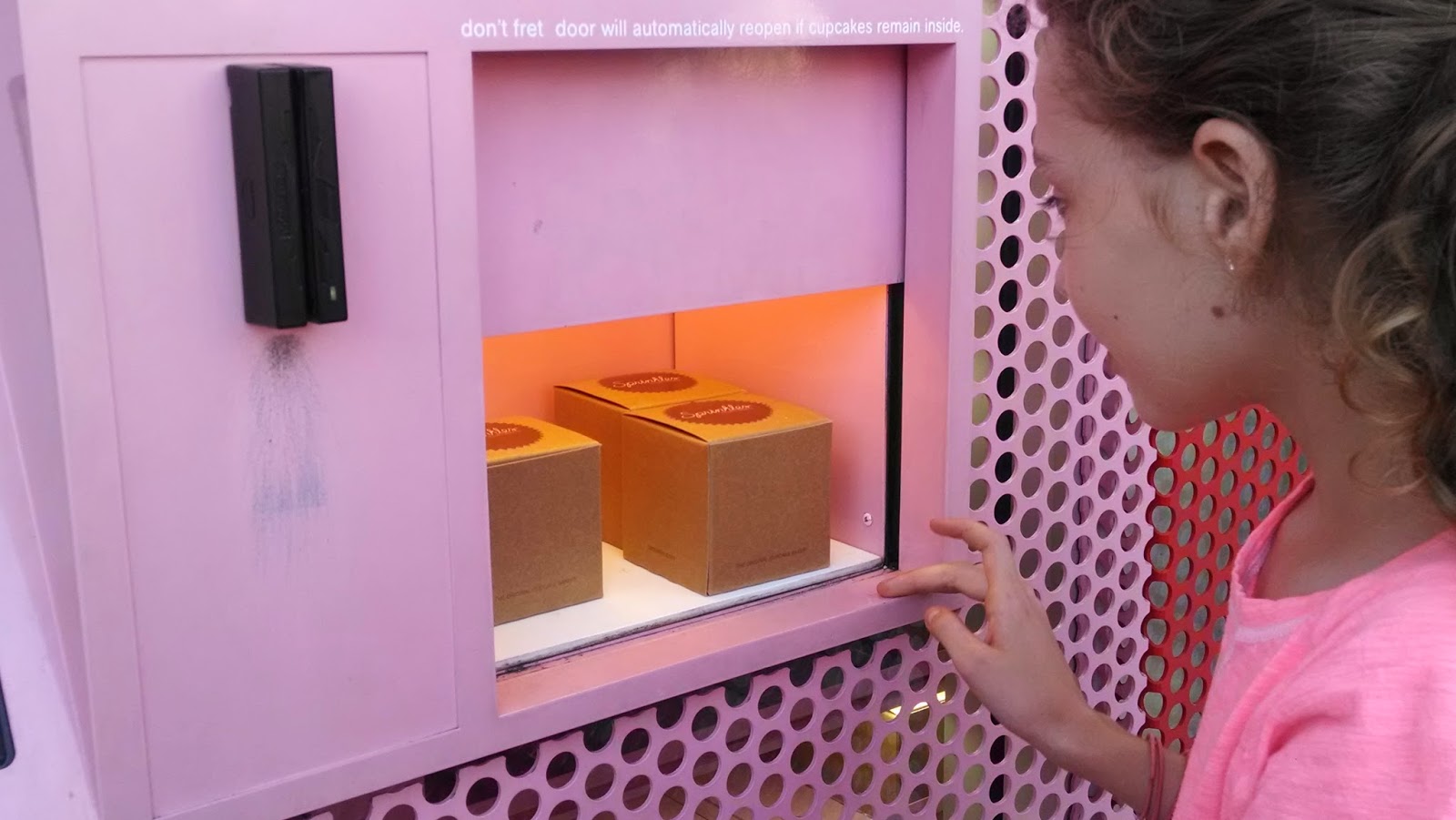 And then we got in line outside the store.  The door was closed and there were tables and chairs outside with people loitering about, but when we walked up to the door, we were told there was a line, which we didn't notice at first. 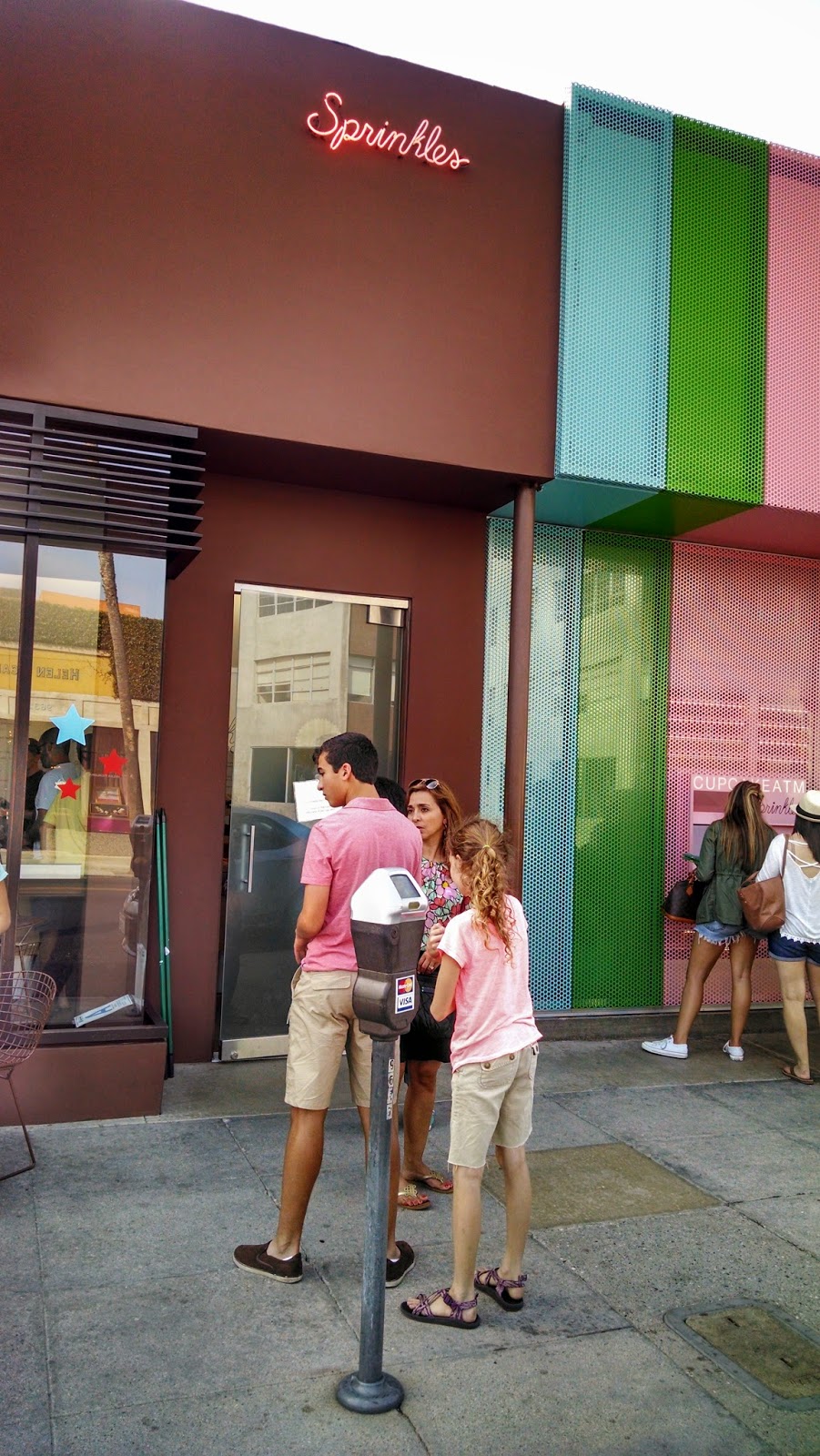 There was a funny little note on the door telling us why it was closed and why people weren't standing nearer:  It says "Please keep the door closed...this helps us maintain the freshness of our cupcakes".  I think they're being a little precious about their cupcakes.  It was pretty cold when we finally got in there, but the shop probably only fits half a dozen people anyway and they really want the door closed to keep their electric bill from skyrocketing. 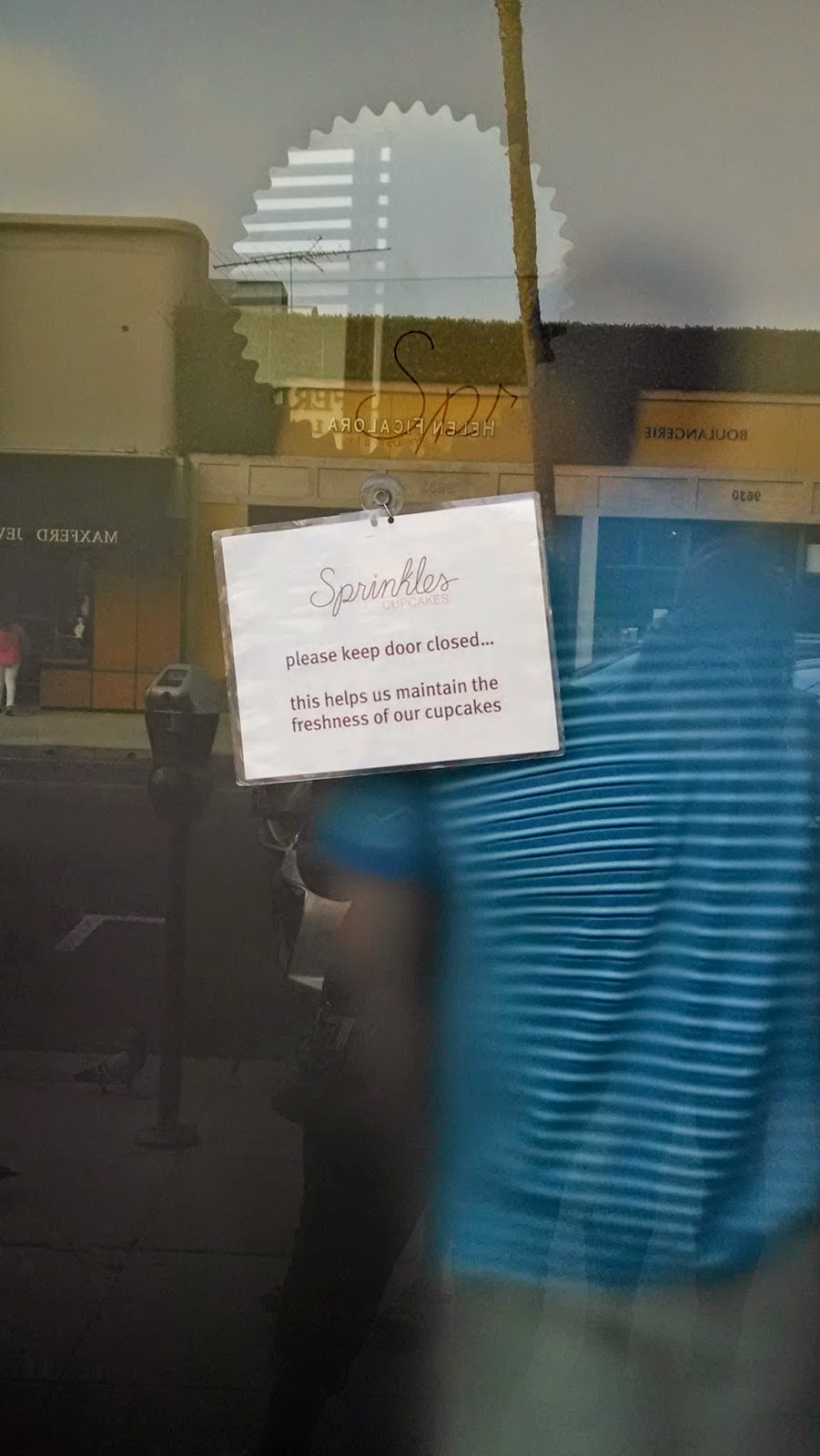 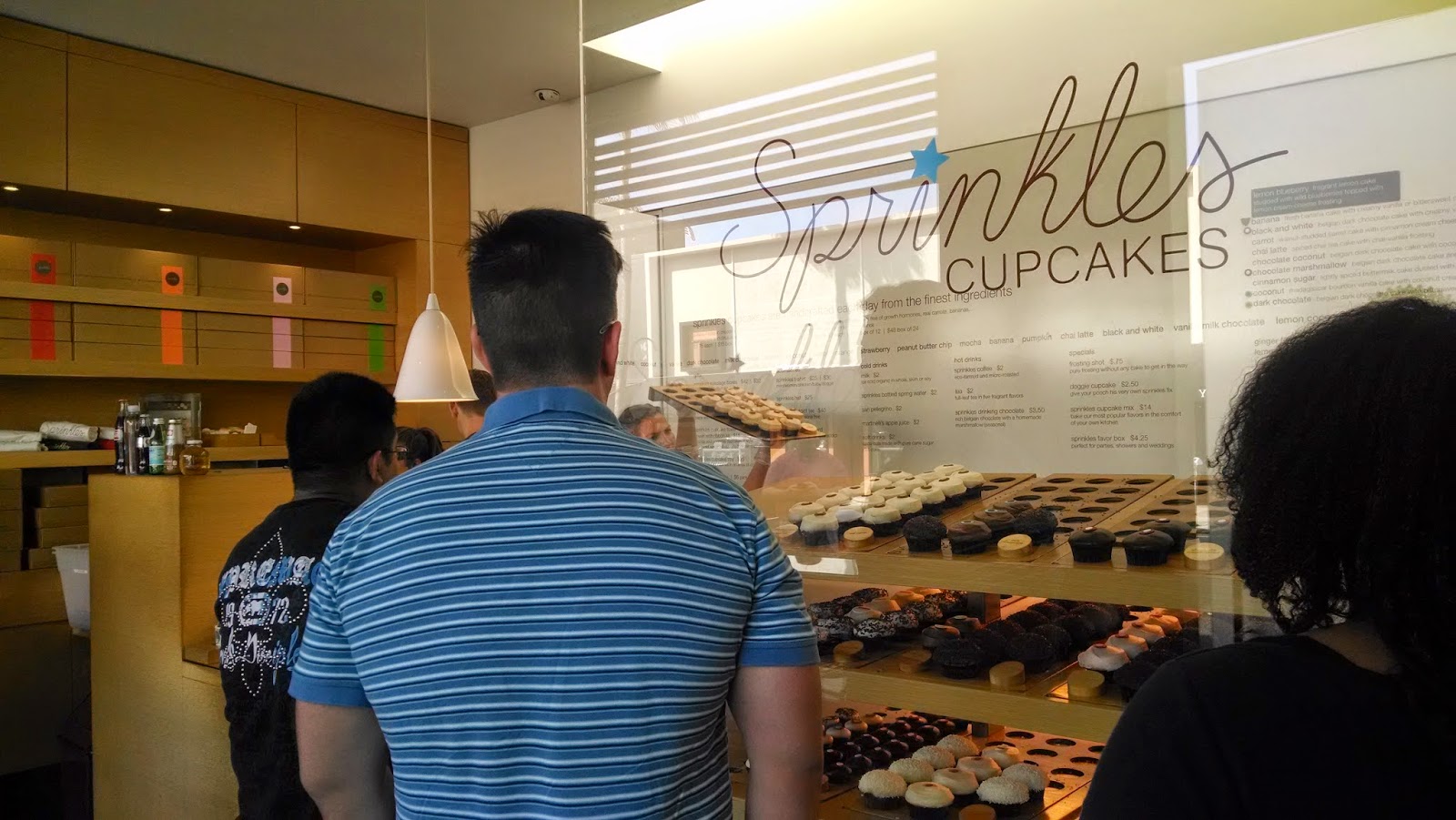 They sold tshirts, mixes, toys and all sorts of things inside that tiny shop.  I bought a "large" tshirt, but ended up giving it to my daughter later because "large" in Beverly Hills apparently means "small" in the Midwest :p. There were at least 3 people behind the counter and cupcake trays kept coming out while we were there. 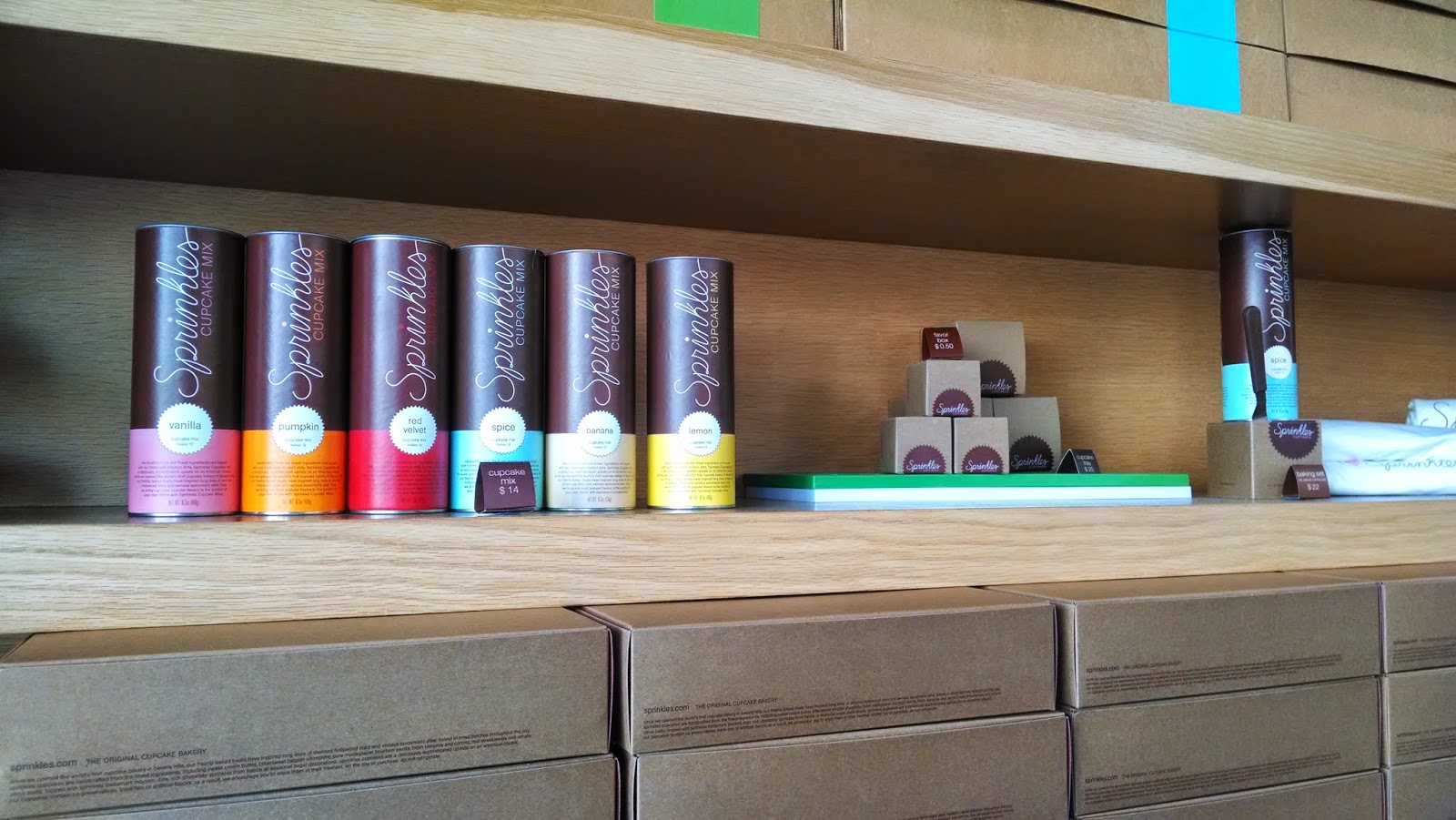 This was adorable and I considered buying it for my daughter, but truthfully, I'm the one that wanted it, not her, so I settled for a picture. 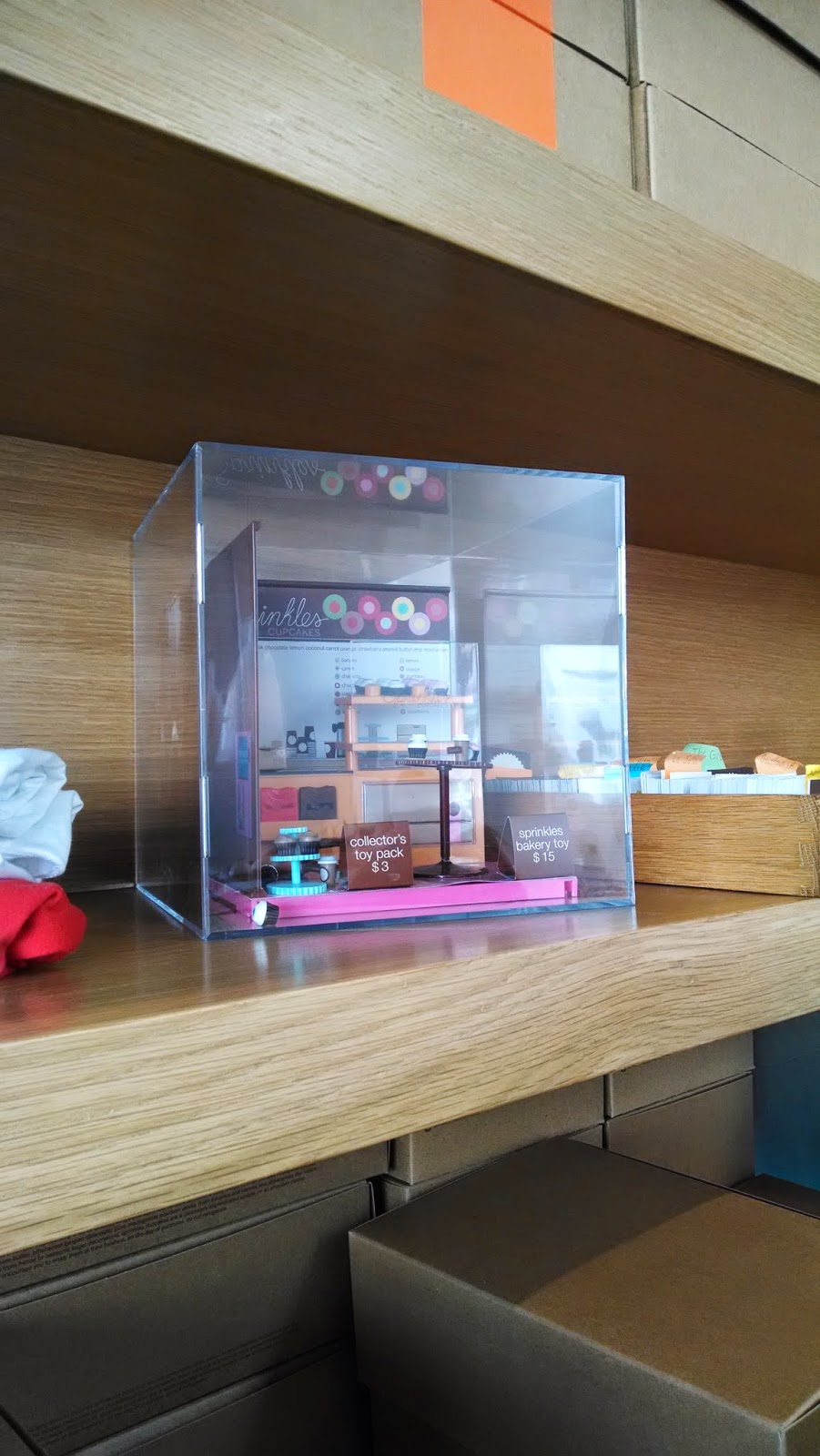 Of course I had to grab a menu and some of the adorable branded wooden forks for the hotel room. 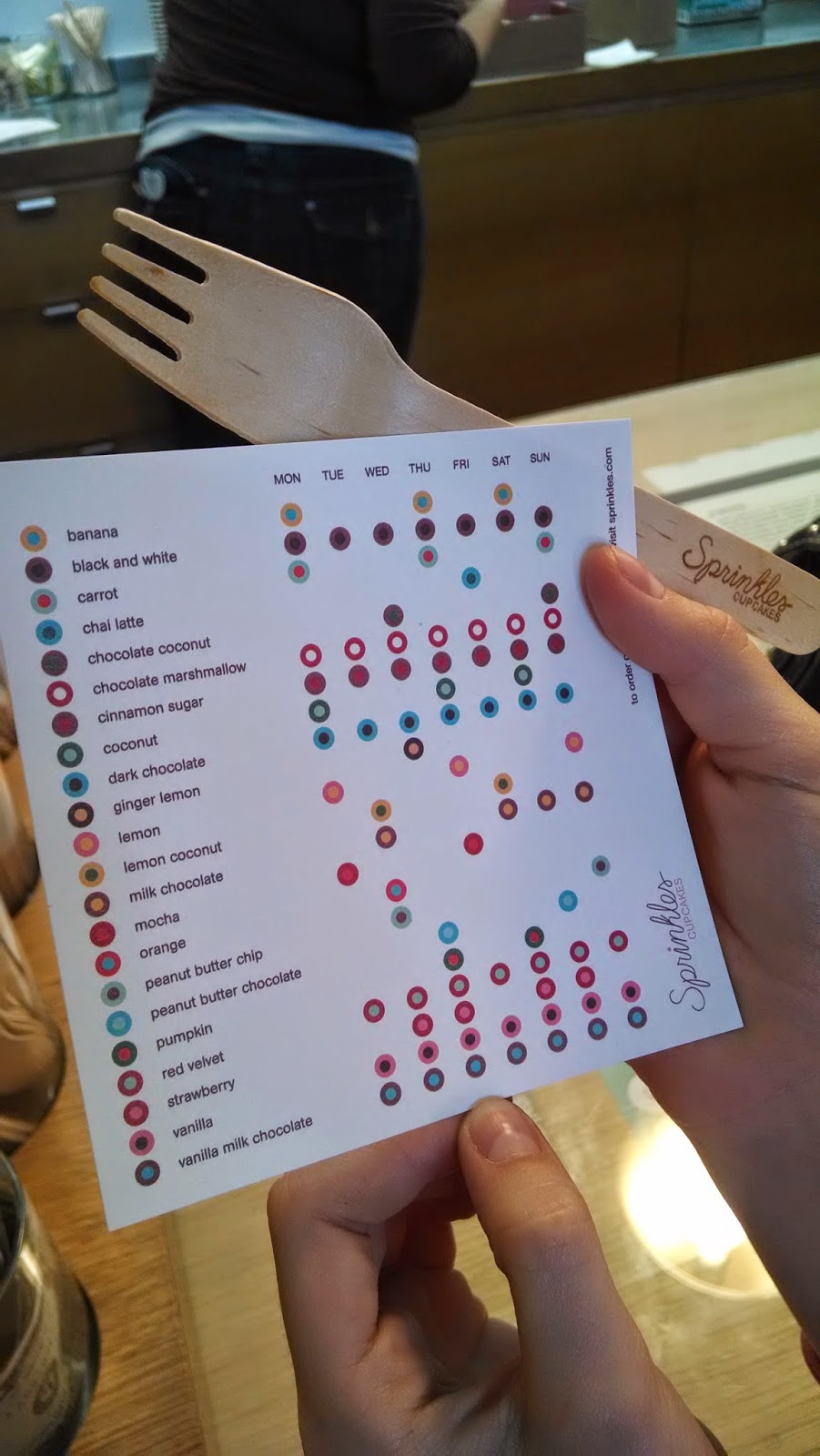 When we arrived back at our hotel, this too precious note was inside the box.  Apparently, we should tip over our their cupcakes or bad things can happen.  I do appreciate the "do not refrigerate" note, since that's the best way to eat a 3GC cupcake as well. Beware of refrigerated cupcakes or bakers who tell you to refrigerate them. 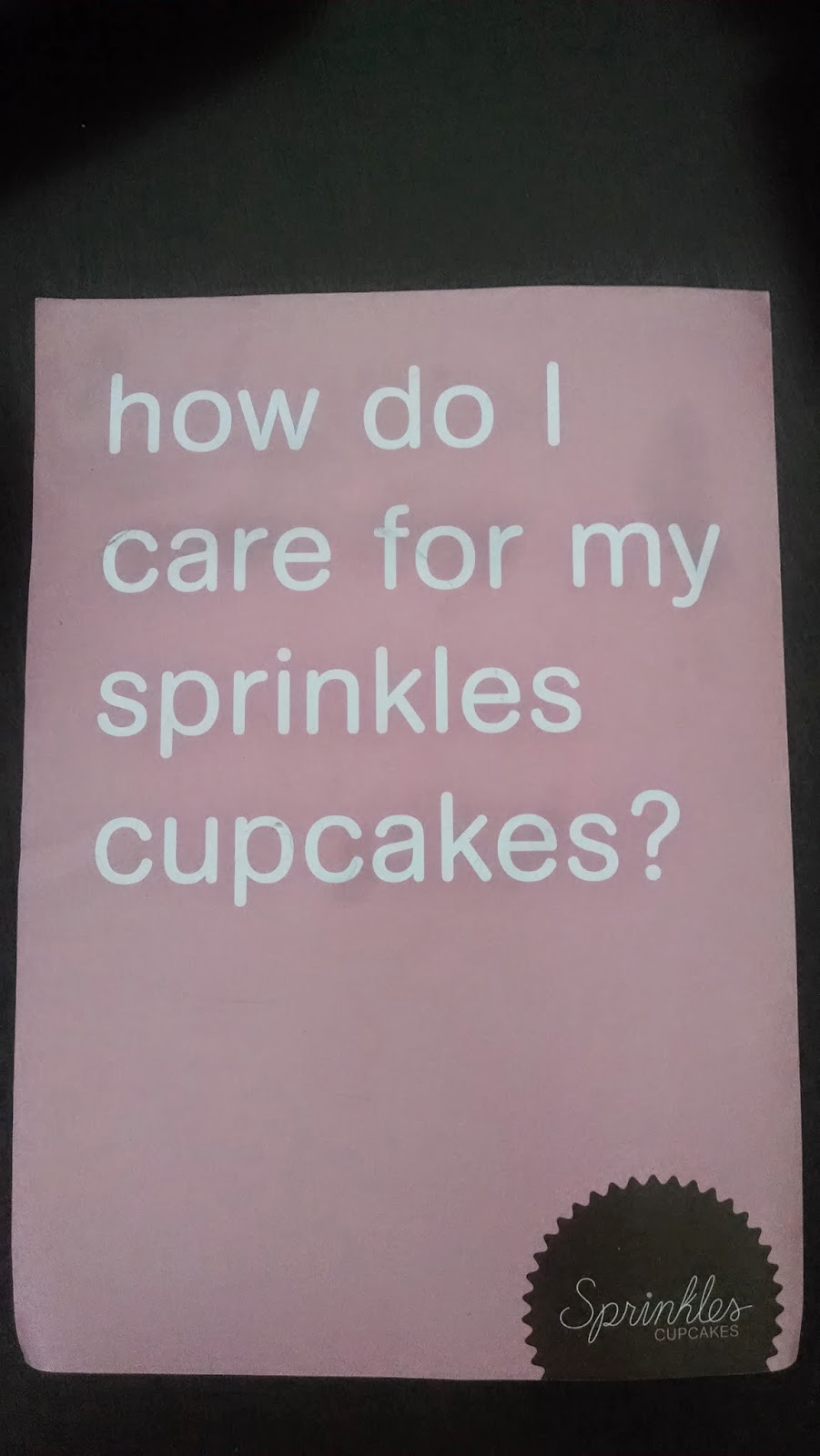 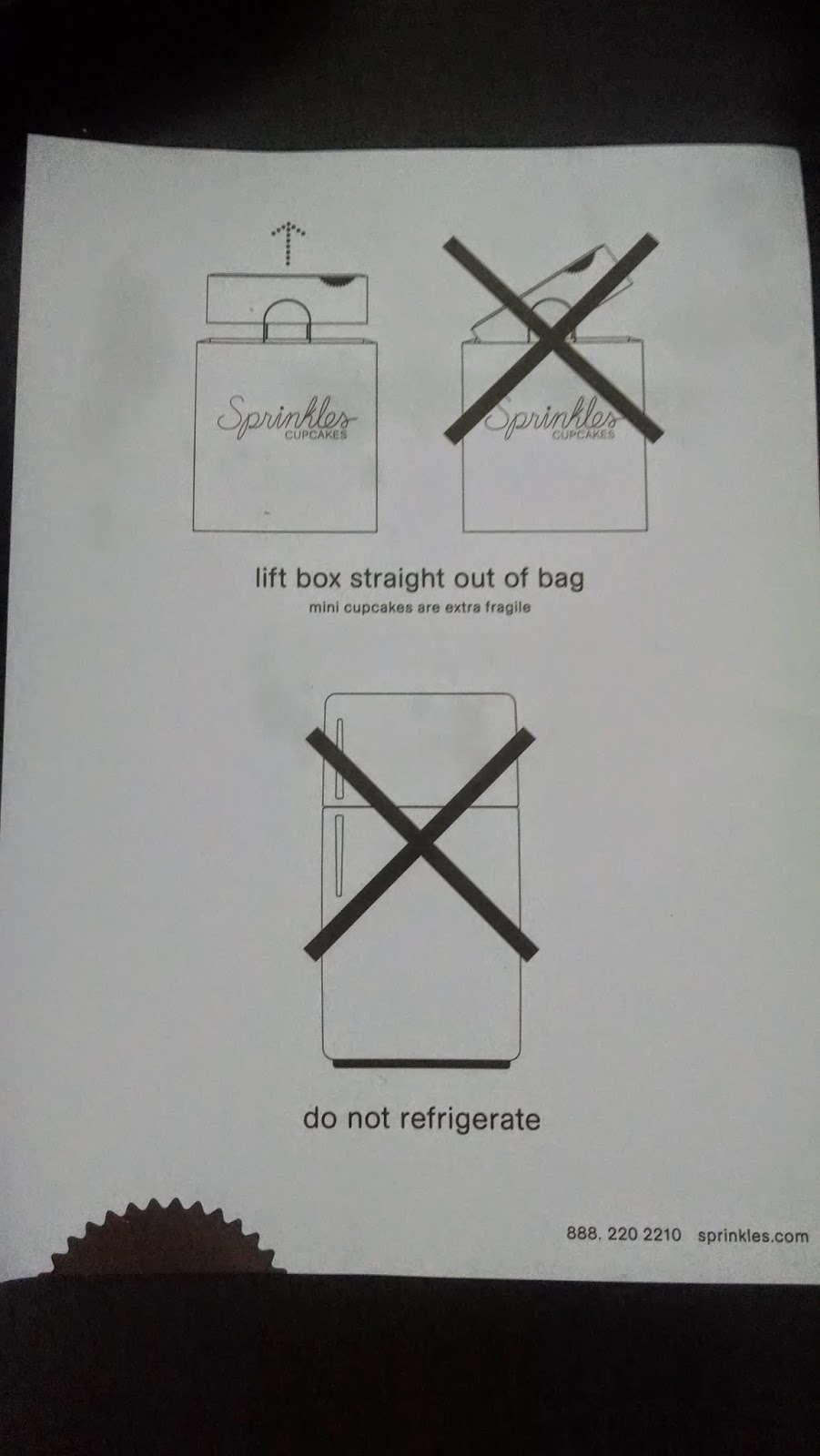 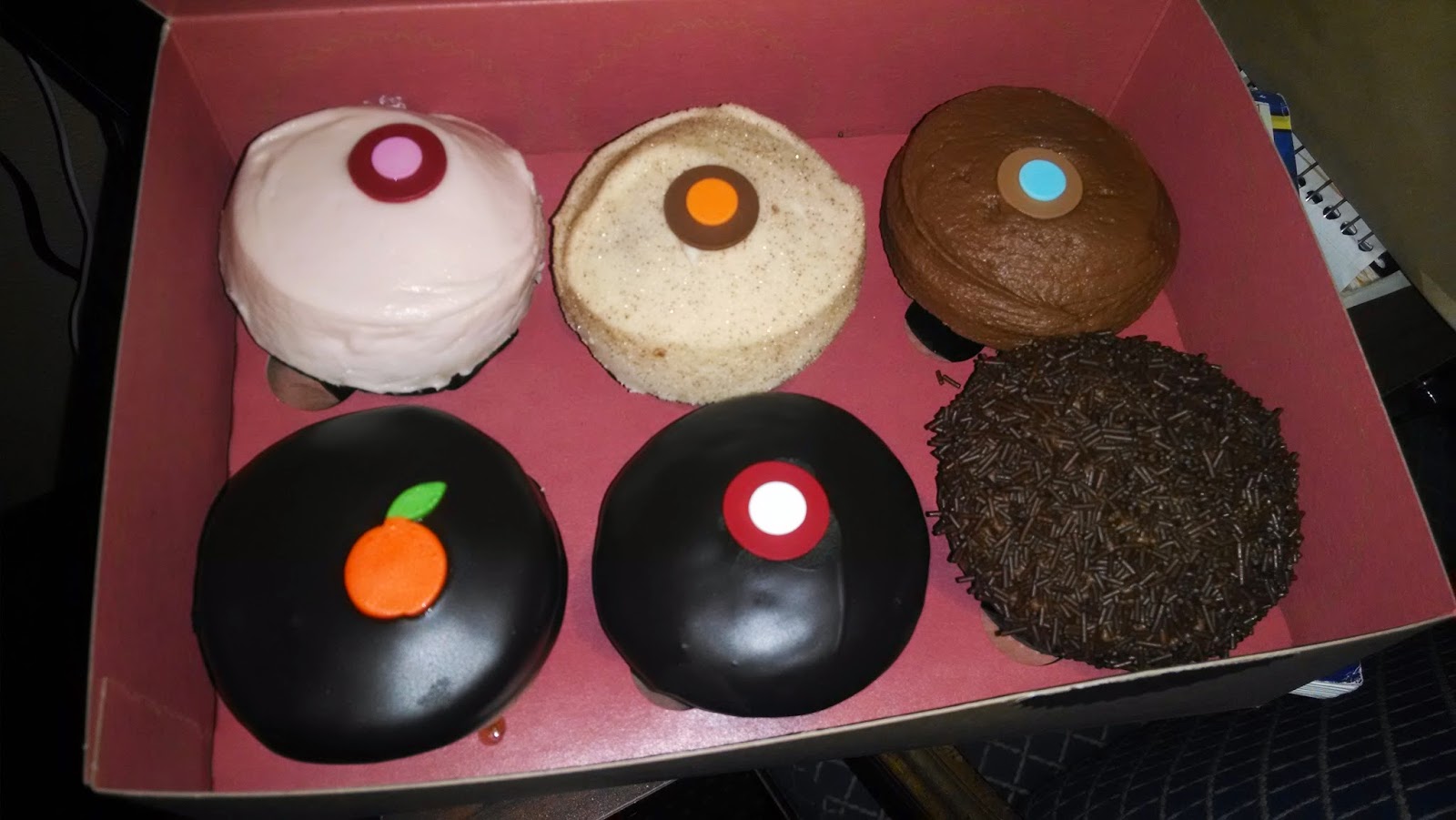 Now for the tasting results!  Most of the icings had a nice flavor, but not very bold for cupcakes from the star of Cupcake Wars who is always telling people their cupcakes need to have a strong flavor.  The fruit flavors had the zest or pulp of the actual fruit which was nice and the consistency was a lot like our own Cupcake A La Mode, which may be why I like it so much ;).  However, the peanut butter frosting was a bit too chunky and not sweet enough for my taste and the chocolate ganache was more bitter than I typically like.  The milk chocolate frosting, however, was creamy and rich, but definitely a light enough flavor of chocolate to be considered "milk", almost like a candy bar.  The coconut and cinnamon were my favorites and interesting to note is that the coconut was a lot like 3GC, with the flavoring in the icing itself and then covered with (non-toasted) coconut.  Many people today think it has to be toasted to be considered gourmet, but apparently Sprinkles agreed with us.  My husband said the red velvet wasn't necessarily the best he'd ever had, but it was definitely up there.  My daughter's favorite was the lemon blueberry, with real whole blueberries in the cake.  Now to the downside.  The cakes were all pretty dense, with a large homemade crumb, which I like, but the flavor of the vanilla cake was almost inedible by itself.  It wasn't sweet, but it also had a bad taste (not after taste) like you were eating baking soda, maybe?  All of the vanilla cakes had this flavor consistently.  When eaten together with the frosting, it was tolerable, but that's no way to spend $4+ on a medium cupcake.  Also, the ubiquitous and infamous gelatin markers on top of the cupcakes was just gross.  Technically, they are edible, but even fondant tastes better.  My guess is that the gelatin tabs are easier and cheaper to produce and last longer, like cockroaches.
Did I mention I was in LA on a trip to Disneyland? 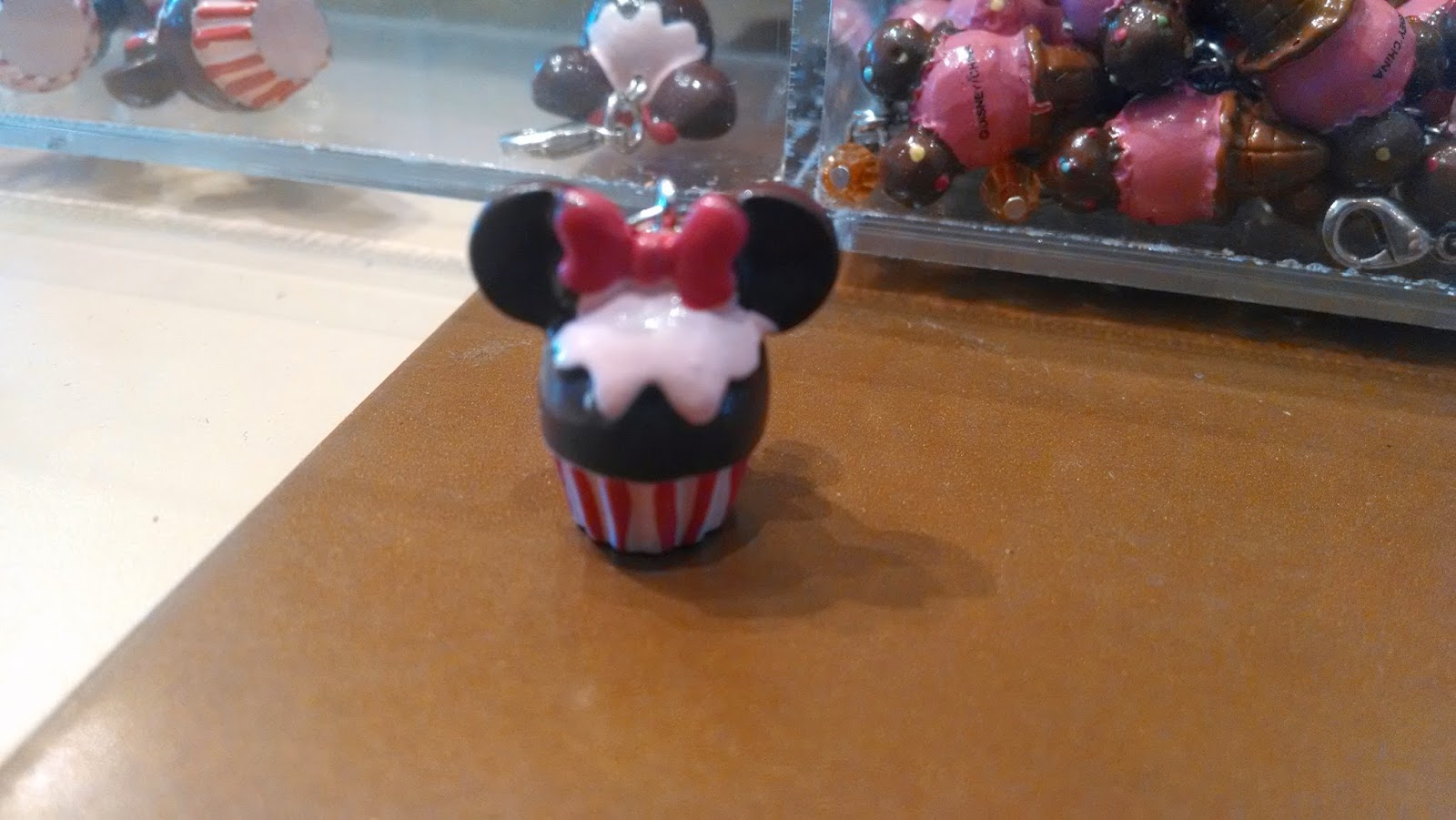 I picked up a Lemon Strawberry cupcake on the way out of Disneyland and it was WAY better than I expected.  The cake was moist and flavorful and the strawberry sauce and chocolate shavings were a nice combination.  The only thing that would have made it better is if it had real whipped cream on top, but I'm not gonna quibble.