Posted by Nichelle on August 03, 2014
I don't think the word "cakie" will catch on like cronut, but it is used to describe a cake-like cookie. Duncan Hines sent me their limited edition autumnal mixes to try. One of them is the Caramel Apple Cupcake. The mix will be on the shelves of grocery stores starting in September. The mix yield a dozen cupcakes, so it it great for families. The caramel apple flavor has an authenticity that pleasantly surprised me. Instead of baking cupcakes, I tried the suggested caramel apple cakies which was on the side of the box. I did added more spice with a half of teaspoon of cinnamon and a half of teaspoon of ginger. 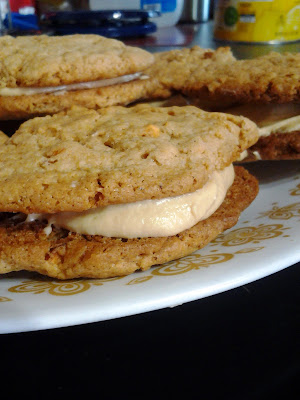 I used 2-3 tablespoons of cream cheese with 5 tablespoons of butter instead of using the suggested 8 tablespoon of butter with the caramel filling packet. The goal was to not have the filling between the two sandwich cookies to not be two sweet and buttery. The filling is delicious. I licked the spatula but was tempted to lick the mixing bowl as well. The cookies were bigger than I had expected and I got 16. If they were smaller, the mix could have yield about 20-24 cakies. My mom enjoyed one and she's pretty particular, so I highly recommend making these. 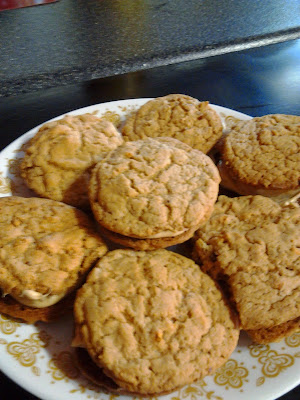