Posted by Unknown on September 23, 2014
Sometimes I feel like I'm forever posting about cupcakery closures, so I made it a point to actually search the web for recent cupcakery OPENINGS and I'm happy to report that I found almost two dozen openings as compared to less than half a dozen when I did a similar non-scientific search for closings.  Yay, Cupcakes! 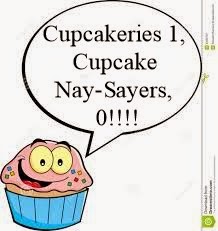 Here are those lists:

Openings since July - look for one near you!