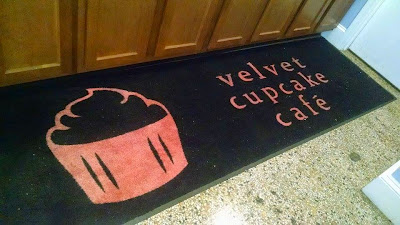 On a road trip to St. Louis from Kansas City this weekend, I finally had a chance to stop by The Velvet Cupcake Café, located in the Tiger Hotel in Columbia, MO.  The shop is small, but includes breakfast and lunch items and a few tiny tables.  The cupcake display was nice and the cupcakes looked great - large, gourmet and beautifully decorated. 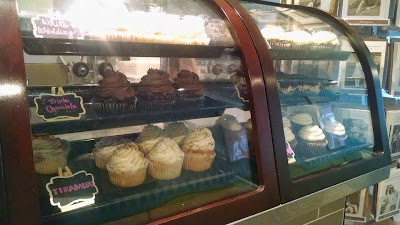 There were 9 flavors at lunchtime on Sunday when we were there, so I decided to try one of each and was told that with a purchase of 10, I'd get 2 free, so we ended up getting three doubles to take to friends when we arrived back in KC.

Unfortunately, there wasn't much to like past just looking at them.  Most of them were dry and none of them were filled.  The red velvet was the driest and that flavor was just added to the display as we watched.  The cream cheese frosting that was on a few of them was the runniest, blandest icing I've ever tasted.  The frosting on the rest was very grainy.  The runny frosting was on the tiramisu cupcake, which kind of went with that style of dessert, so I didn't mind it as much there and the cake itself had espresso baked it and generally good taste.  The blueberries had all settled to the bottom of the dry, flavorless vanilla cake of the lemon blueberry. The carrot cake itself was chunky (in a good way) and flavorful, so this was one of the rare occasions that I went back for seconds on cake, not frosting.  All in all, they were attractive to look at, but the execution left a lot to be desired.

Sorry to say I won't be stopping there again, but I did like the innovative dozen tray they came in.  If I still had my own cupcake business, I'd be inclined to ask who their supplier is.