Grapefruit Are Not Just For Breakfast With Pink Grapefruit Cupcakes 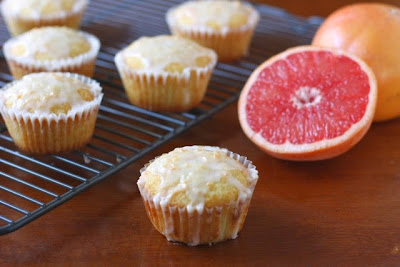 When I was a kid, I thought grapefruit were big oranges. Surely I was not the only person deceived by a grapefruit. They look so sweet with its bright pink color. Unfortunately, the first time I tasted one I was really disappointed because it was not as sweet as an orange. Later, I learned to appreciate grapefruit and I like to eat them for breakfast. Grapefruit is the only fruit that is associated with a fad diet, the Grapefruit Diet.  People have been doing the Grapefruit Diet for decades with the thought that grapefruit burns fat. It doesn't burn fat, but since it is a kind of elimination diet, people do lose weight. The truth is that grapefruit is rich in vitamin C and is low glycemic food. Grapefruit is not just for breakfast anymore and can be used in desserts like pink grapefruit cupcakes. Check out the recipe on Cupcakes.
pink grapefruit cupcakes