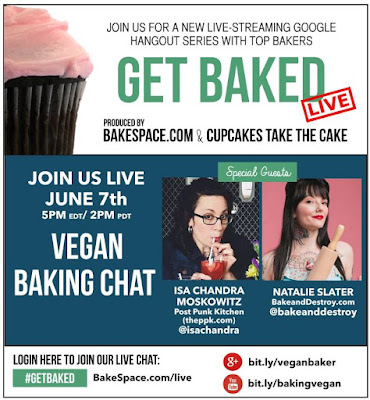 Our next Get Baked is about vegan baking and we have two rock stars on tap to talk about it.

Isa Chandra Moskowitz is the bestselling author and coauthor of many books, including Isa Does It, Veganomicon, Appetite for Reduction, and Vegan Cupcakes Take Over the World. Her website, Post Punk Kitchen, is beloved by millions. Isa has been cooking up a vegan storm for over two decades and has been named favorite cookbook author in VegNews for seven years running. Raised in Brooklyn, New York, she now lives in Nebraska, where she brings swanky vegan comfort food to the great people of Omaha at her new restaurant, Modern Love.”
Natalie Slater – Creator of popular vegan food blog Bake and Destroy, Natalie Slater has been described as “Martha Stewart meets Motorhead,” taking vegan cooking to places it has never been before. Influenced by slasher films, pro-wrestling, punk rock and heavy metal, her quirky-yet-delicious comfort foods are a refreshing take on vegan eating with award-winning flavors. Along the way, her off-color humor, irreverent rants and density of pop-culture references will make you laugh out loud. Natalie has appeared on Food Network, The Cooking Channel, and WTTW Chicago Tonight as well as on the pages of Time Out Chicago and Bust Magazine.