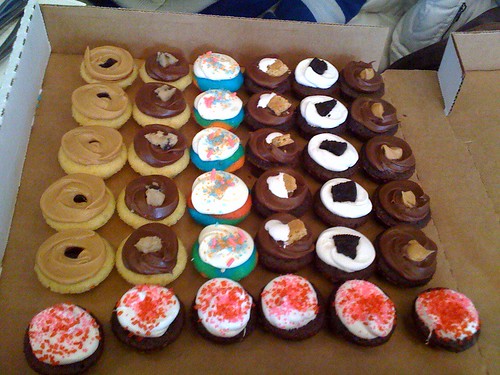 Baked by Melissa’s Melissa Ben-Ishay discovered she had a gluten sensivity, and they spawned a new line of gluten-free cupcakes From the Wall Street Journal.


For more than a year, Ms. Ben-Ishay had been tinkering with the possibility of a gluten-free line, but the product development had stalled. “I wasn’t as passionate about gluten-free as I could have been,” she said. Now she had a new incentive. Two months later, the company signed a lease for its first gluten-free store, which is set to open Nov. 17 in Midtown. “It really was the swift kick in the butt I needed,” Ms. Ben-Ishay said. The eight new gluten-free flavors she will offer at the store—including triple chocolate crunch, red velvet, classic yellow with chocolate frosting, tie dye, caramel, cinnamon, chocolate marshmallow and peanut butter cup—are a mix of flavors on the regular menu, discontinued favorites and new inventions, said Ms. Ben-Ishay, who recovered from the gluten sensitivity in her 20th week of pregnancy and is due in February. They will sell at the same price as the traditional cupcakes, $1 each.

Kudos to Baked By Melissa for selling the gluten-free cupcakes at the same price as traditional cupcakes, especially since for most people it's a health issue and not be a luxurious diet.
Baked by Melissa gluten free New York