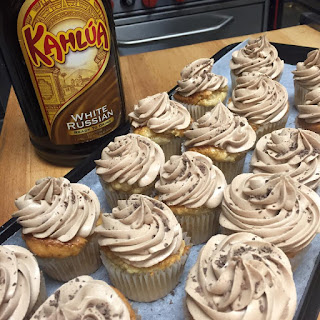 I have had a sip of a White Russian cocktail once. My first boss when I was an internal auditor was having one while we were waiting on a flight in the Delta lounge. I thought it was early to drink, but he said it was afternoon in Cincinnati. For the uninitiated, a White Russian is a cocktail with vodka, coffee liqueur (usually Kahlua), and cream served with ice in an Old Fashioned glass. Although I like the ingredients, I always thought that a White Russian is too sweet for an alcoholic drink, but it's probably perfect for a cupcake recipe.

Apparently a recipe for White Russian cupcakes from 3 Bears Gluten Free Bakery has gone viral, so it makes sense that I post it on Cupcakes Take the Cake. BTW, Kahlua is not gluten-free, so this is a NOT a gluten-free cupcake recipe. Owner doesn't give out the full recipe, in the Facebook post. However, she gives enough information for a cupcake baker to create these popular cupcakes. This is great because not everyone lives in Potsdam, New York.