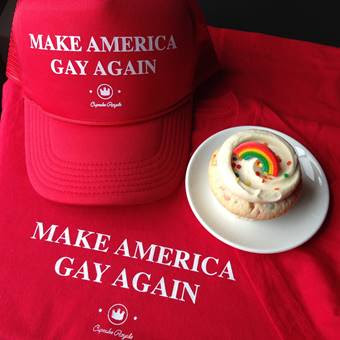 The Gay cupcake is back for its’ fifth year and this year the mighty colorful rainbow cupcake is putting its’ super powers towards helping LGBT equality and awareness, in a big way.

A couple of years back Cupcake Royale partnered up with Dan Savage and the “It gets better project.” donating more than $10,000 to help communicate to lesbian, gay, bisexual and transgender youth around the world that it gets better, and to create and inspire the changes needed to make it better for them. They hope to continue the effort of supporting LGBQ families, youth, transgender and equality by partnering up with the National Center for Lesbian Rights  AKA NCLR.

For every $5 Gay cupcake that is sold NOW through June 30, $1 dollar will go directly to the NCLR to help achieve LGBT equality through litigation, legislation, policy, and public education. The nonprofit serves more than 5,000 LGBT people and their families throughout the United States each year, including LGBT parents, seniors, immigrants, athletes, and youth.

“A year ago, we woke up to Rainbow Crosswalks in Capitol Hill days before the Pride celebration.  The next day the Supreme Court ruled on equality for all lesbians and gays that wanted to marry. We felt such hope and pride - in our country and each other.  That was only a year ago - and look where we sit today with all the anger and frustration with our current candidates.  So our thought was - let’s go back to last year.  Let’s remember the hope we felt just a year ago.  Let’s Make America GAY Again!  And focus on equality instead of politics - at least for June!” said Cupcake Royale CEO Jody Hall.

To sweeten the pot even more, Cupcake Royale is also donating $2 from their “Make America Gay Again” line of merchandise (T-shirts and Trucker hats) available at all stores and T-shirts sold online. The Gay cupcakes are offered at every Cupcake Royale and online at cupcake royale.com.  So what do you say Seattle, get out and #ShowYourPride #MakeAmericaGayAgain