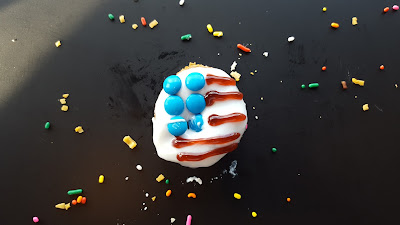 After years of opening Tulsa-based Daylight Donuts shops on the Kansas side of the Kansas City area, Andrew (#donutgenius) and Meghan Cameron checked out donut shops and food trucks around the country before settling on a concept to create a new brand here in KC, this time on the Missouri side and Donutology was born! 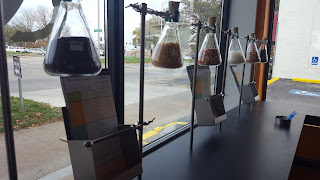 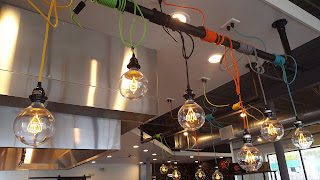 The "-ology" part of "Donutology" refers to the science experiment aspect central to any visit to the new store.  Beakers, atoms and bubbles decorate the walls and comprise much of the furnishings that sparsely but cheerfully decorate the large, inviting space.  The purpose of this sweet experiment? To figure out your personal "donut gene" from around 40,000 different combinations available on a daily basis when you consider the cakes, the icings, the toppings and the drizzles, including everything from cinnamon sugar to bacon and cotton candy pop rocks, selected for a balance of traditional and fun.  Clever marketing, since that means guests can come every hour, every day for the rest of their lives and never have the same thing twice.

The Donutology concept is the latest in the recent made to order trend (self-serve was briefly considered, but was thought to be too out of control) with items like frozen yogurt and pizza, but birthday parties ($5 per person for 3 donuts each) and team building outings are available (after signing a "no food fight" waiver - jk) where the customer can become the Donutician him or herself or every step in the process but the delicate skill of actually dipping donuts into the icing. Incidentally, lest you think making your own creations would be easy, training new Donuticians has been taking even longer than the owners thought it would, with all the different toppings, cross-dipping on the line and numerous glove-changes during a shift. 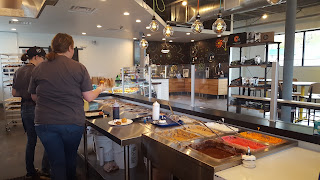 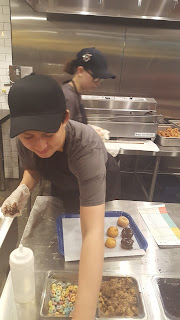 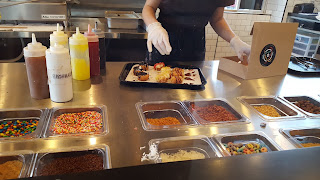 Top selling combinations organically evolved: Maple Bacon - Andrew's favorite, Strawberry Marshmallow with Fruity Pebbles and Peanut Butter Reese's with Chocolate Drizzle.  For now, customers fill out paper checklists with their selections in each category like delicious bingo cards before handing them to the Donuticians (who will also happily make something up for you if you ask), but Andrew hopes to have touch screen ordering available soon, as well as helpful posters with suggested flavor combinations like S'mores for those customers who just might be overwhelmed with all the options at first. 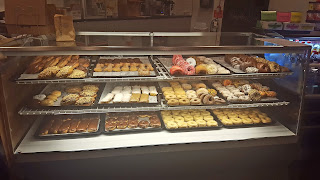 For the record, the most popular full-sized Daylight Donuts are the comparatively boring Glazed, Apple Fritter and Cinnamon Roll. Currently, the large donuts sold at Donutology are transported from the Lansing, KS Daylight Donuts location. Daylight Donuts location make up half their sales (Donutology is actually their biggest reseller), but they expect the minis to overtake those sales once lines have died down, since customers can just walk in and walk out with regular Daylight Donuts if they don't have time to wait for the artisan style cuties. Another item on their menu is a savory local Johnsonville sausage wrapped in donut batter, but not followed by a dusting of powdered sugar like carnival food - I asked. 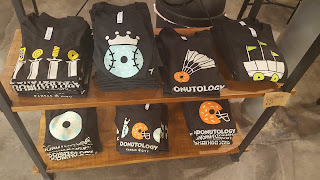 The owners of Donutology pride themselves on utilizing local ingredients like Daylight Donuts' signature flour, local products like Shatto Milk (leave a $2 deposit for the bottle) and Roasterie coffee (brewed with the same process as at Roasterie locations, with the beans themselves often arriving still warm from the downtown branch) and even local artists were employed to devise logos and create art for the walls and t-shirts (which are already on reorder).

Mini donuts were chosen to add another new element to the donut scene and simple logistics dictated that only vanilla cake donuts are guaranteed to be available on weekdays, with chocolate and blueberry additionally on weekends, but occasionally seasonal flavors will sneak in during the work week, like pumpkin spice while I was there, due to a fun election based special this week, the orange Donald Trumpkin (don't worry, Hillaberry was there too). 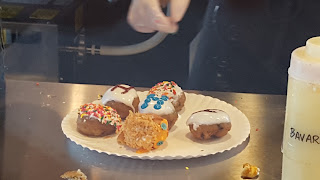 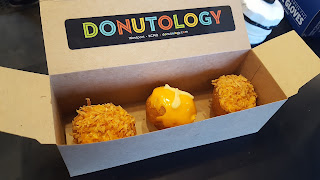 Minis are thrown out (or just down employees' throats) if they are not sold after one hour, which explains why every time I have stopped in, the donuts and all the toppings have always tasted fresh and delicious! So far my favorites involve combinations of lemon and raspberry or anything with marshmallow or coconut and my only complaint is that if you don't eat the ones with marshmallow right away, that topping oozes right through the hole onto the paper, forcing me to scoop it up with my finger...wait, did I call that a complaint? And who's not eating them right away anyway?

Simple logistics dictate that just vanilla cake donuts are guaranteed to be available on weekdays, with chocolate and blueberry additionally on weekends, but seasonal flavors will sneak in during the work week, like pumpkin spice while I was there, due to a fun election based special this week, the Donald Trumpkin (don't worry, Hillaberry was there too).  They also do a lot of charity specials, contributing profits from custom made variations to local groups like the Boy Scouts for a limited time.


Always thinking of new ideas, Andrew plans to launch a donut 90,000 feet into space with a weather balloon and he may have customers vote on the flavor to be so honored (Check out this link to see a KC area cupcake that was launched into space in 2012). They also do a lot of charity specials, contributing profits from custom made variations to local groups like the Boy Scouts for a limited time.

CTTC Exclusive SCOOP: Donutology is in the early stages of exploring raised minis for decorating! I'm personally excited about this development, because although the bite sized cakes are tasty, I can't resist the soft, glazed goodness of a raised donut.  To hear Andrew tell it, there should be a large wooden contraption occupying the large open space behind the cash register as soon as he figures out how not to make a total mess while on display to the public, similar to the messy entertainment of Chip's Chocolate Factory making fudge in front of crowds at Crown Center on a regular basis.

Donutology is open Sunday through Thursday from 6am to 9pm and Friday and Saturday from 6am to 11pm at 1009 Westport Road, Kansas City, Missouri, 816.298.5222, donutology.com. The minis can be ordered in batches of 3 ($2.25), 6 ($4.50), 15 ($10.99) or 35 ($24.99) - no matter what toppings you choose! Calories average about 100 per fully loaded donut. Typical creation time is 3 minutes for 6 donuts, but if there's a long wait in line, samples might circulate.  Or have a seat - there is plenty of space to sit around and enjoy your designer sweets like a coffee shop and open later than most. Donutology also has a walk-up window for this highly walkable area of Westport, although they initially wanted it to be a drive-up which was shot down by the city because of the small parking lot and one way streets nearby.


Something else to look forward to soon is the perfect marriage of Belfonte local ice cream for donut milkshakes, available by the end of the year in your choice of vanilla or chocolate combined with your pick of donut combinations.  Next up - donut sundaes!