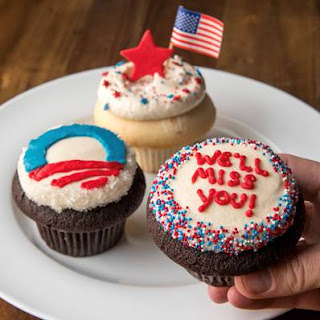 Seattle, WA – January 10, 2016 Tonight, as we watch President Barack Obama deliver his farewell speech from Chicago, after eight years of devoted service to our country, no doubt millions of people will be watching. In tribute to this ending of an era, Cupcake Royale is offering Obama Farewell Cupcakes to celebrate our appreciation. Stop by any of the six cafes to pick up cupcakes and enjoy some sweetness as we bid farewell to POTUS. The Farewell cupcakes will be available in both chocolate and vanilla cakes as well as a variety of creative versions dedicated to Obama. #wearereallygoingtomissyoupresidentobama #farewellobama #weloveyouobama #farewell #thankyou #eightgreatyears #nobodydiditbetter #POTUS #Obama #hope For more information about Cupcake Royale, visit www.cupcakeroyale.com
#farewellobama Barack Obama Presidential cupcakes