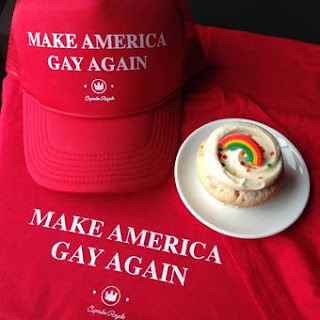 It's the 4th day of June which is Pride month, but the LGBTQIA community was dealt a bad hand by the Supreme Court.  They voted today that the Colorado baker's first amendment were infringed upon in the lower court's ruling.
From the AP reporting on the Masterpiece Cakeshop ruling:

The same-sex couple at the heart of the case, Charlie Craig and Dave Mullins, complained to the Colorado commission in 2012 after they visited Phillips’ Masterpiece Cakeshop in suburban Denver and the baker quickly told them he would not create a cake for a same-sex wedding.Colorado law prohibits discrimination on the basis of sexual orientation, and the commission concluded that Phillips’ refusal violated the law. Colorado state courts upheld the determination.But when the justices heard arguments in December, Kennedy was plainly bothered by comments by a commission member. The commissioner seemed “neither tolerant nor respectful of Mr. Phillips’ religious beliefs,” Kennedy said in December.That same sentiment suffused his opinion on Monday. “The commission’s hostility was inconsistent with the First Amendment’s guarantee that our laws be applied in a manner that is neutral toward religion,” he wrote.

We here at Cupcakes Take The Cake have always touted LGBTQIA rights, and we have showcased bakeries that celebrated the month of June with pride cupcakes and cakes.   Now,  we want to take a small step forward and identify LGBTQIA friendly bakeries who do wedding cakes in all 50 states.  If you are an ally to LGBTQIA rights, leave your bakery name and URL in the comments below so we can share the list out to people.  No one should have to go through what Charlie and Dave have endured.