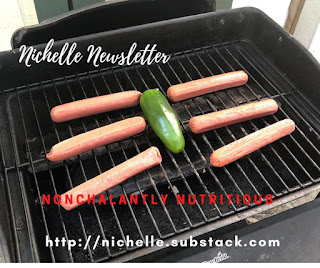 It's Nichelle of Cupcakes Take The Cake.  I haven't been posting here much. I have a new project which is my food and culture newsletter, Nichelle Newsletter.  I publish it weekly. You can subscribe below.

Here's a sample of this week's newsletter.

I have a wonderful idea that came from the kindness of my friends and neighbors. I bought some bison dogs from Iron Bison, a local farm. However, I don’t have a grill. My neighbor has a propane grill outside his shed and I borrow it for less than an hour to grill the hot dogs and a pepper. So my idea is to have a grill share for the neighborhood.

My new favorite summer cocktail is a shandy. What’s a shandy?! A shandy is beer mixed with a lemon or a lemon-lime flavored beverage. A bartender friend gave me a quart of watermelon shrub, and I mixed it with a wheat beer. Then I had a cucumber simple syrup which pairs nicely with an IPA and a splash of lemonade. Here’s a recipe for a Mean Shandy that includes bourbon.
culture food newsletter nichelle newsletter Nichelle Stephens