Posted by Stacie Joy on January 20, 2011
I had the pleasure of meeting the Sift Cupcake and Dessert Bar team this summer on my northern California cupcaking trip: I loved my experiences at Sift, so when I heard that they won Food Network's Cupcake Wars, I was delighted for them! Jeff and Andrea Ballus, owners, agreed to take a moment from their hectic schedules and give us their behind-the-scenes take on their experiences with the show.

How did you decide to appear on Cupcake Wars? Did you create a video application?

We created three audition videos! We never heard back, so we would just make a new one and keep calling the producers to see if they watched it. By the end, I'm sure they only said yes to make us stop calling. ;)

What was the filming/taping like?
It was incredibly intense. The crew on the set was amazing...I don't know how they are even standing at the end of the show...we were only still standing because we won $10,000!! Everyone worked so hard, it was a very looooong process. I remember begging the producer to let me change my shoes...my feet were killing me! Corey was a natural, she helped keep us grounded and calm (or so it seemed). 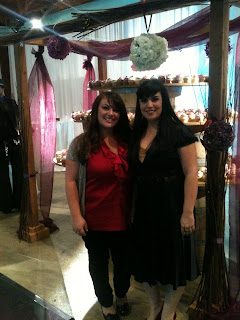 It's so sureal actually being on the set that you've only watched on TV. It's also a little intimidating being in someone else's kitchen and having four or five cameras running after your every move. Many times we were like, "Woah! Watch out for the cameraman!" as we're running with a hot pan.


How different were your experiences than what we saw on TV?

It's really amazing how long you film for versus how LITTLE of it actually makes it in the 30-minute show. We tried giving Justin some of the wine we were using...that didn't make the cut. Ha!

Were you given guidance by the Food Network? Were there things you wanted to do but were unable to?


Take my shoes off, sit down, and enjoy a glass of wine. They didn't allow that... 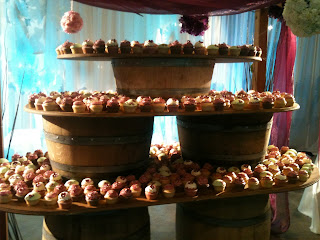 How did you choose your winning cupcakes?

We decided on our Samoa and Pink Champagne, which is one of our best sellers (and perfect for weddings!). Then we decided to bring in a little wine country with our Zinger (Zinfandel Ginger). We could have used our Ooh La La (top-selling red velvet), but we just felt that flavor was a little played out.


Competition was tough. Lucy & Leo's gave us a run for our money. And at the end we really had no idea which way the judges would go. We had two completely different wedding looks and themes. We called them on the air date to congratulate them on a great show. They were good competition!

How has winning affected your business, if at all?

Wow. We imagined business would increase...we just had no idea by how much. Let's just say that we took in extra money in sales that week...and paid for it in overtime! Ha!
In all seriousness, our Sift family has worked so hard, they are simply amazing and we couldn't be more grateful. They must love what they do because they keep sticking around. 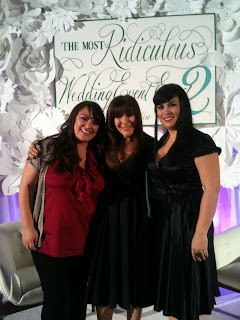 What are you planning on doing with your winnings?

We are launching a Wine Country Cupcake Truck! We'll roam the valley and vineyards and pass cupcakes to the wine-weary...or wine-happy. Follow us on Twitter @Sifted.


Is there anything else you want to share with our readers?
We just received our first Food Network order for Guy Fieri's birthday cupcakes! We're doing sushi, burgers, bbq, pizza, and Jack Daniels-themed cupcakes. We'll send pics when they're done.

We can't wait to see the Guy Fieri birthday cupcakes, and whatever Sift dreams up next!