Just got done delivering / serving a few dozen of these ANGEL FOOD & DEVILS FOOD CUPCAKES at a leaving do in London. The collective "oohs, aahhhs, yummmms, & OMGs" would lead me to believe that they were a hit!  But seriously, how could a combination of lighter than light Angel Food cupcakes topped with a fluffy marshmallow frosting, and deep, dark, rich & moist Devils Food cupcakes filled with marshmallow, topped with a fudge frosting not be a hit?  Plus, aren't they cute?

I'll start with the Angel Food Cupcakes first, as my initial instructions of "you just make them like you would macarons" seemed to irritate a few people, but it really is just like making macarons.  First, here's my tweaked recipe (+ US version + a tweaked version for the UK). This will make about a dozen large-ish cupcakes + a few spare minis.

And here's how you make 'em: 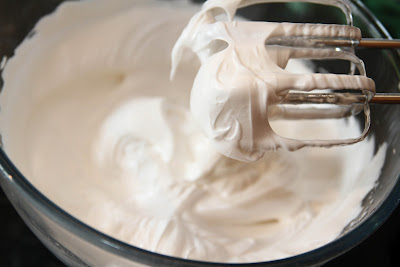 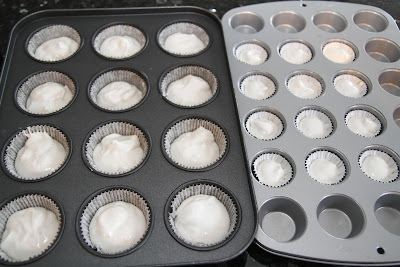 This is what it looks like about halfway through the cooking process ... 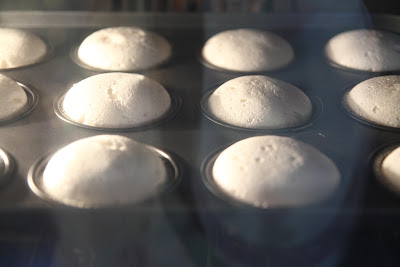 After 20 minutes you can test one by lightly pressing the top, which should be slightly browned and firm. The cupcakes will have also slightly shrunken. That's when they're done. You can also try one; they are heavenly when still warm.  Let them cool on a cooling rack, then frost.

Here's what they look like on the inside: really light, fluffy & divinely delicious! 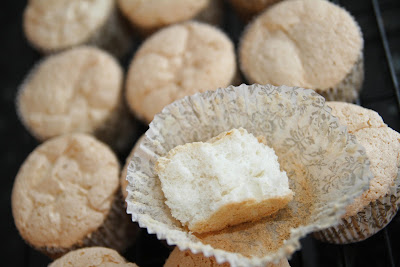 I used my fave marshmallow recipe from Cindy Palcwyn's Campfire Pie recipe, which you can use as-is if you are serving immediately. I mixed about 2 cups of this marshmallow mixture to some stiff buttercream as these angels needed to travel a bit. 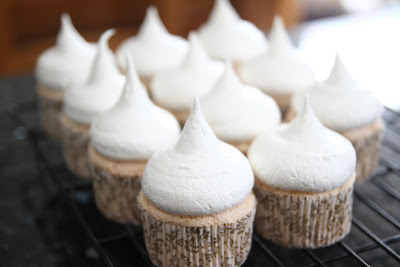 I also made some wings out of royal icing & some other wings & halo decorations. This "Dance to the beat of your angel's wings" saying really inspired me. 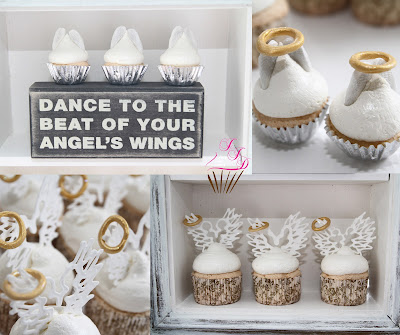 OK - so now for the Devils Food Cupcakes...
Did you know that these are meant to have beets in them? That's what makes them "Devils Food," and the batter would be slightly red in colour as a result. But these days with people's allergies (& anti-weird-food issues - boo!), I decided to mix up a more standard recipe, which I tweaked slightly from the highly-rated Martha Stewart version:

I added espresso powder (or the Starbucks bold sachet thingie) to the 3/4 cup boiling water that you mix up with the cocoa powder. If you can't find Dutch process cocoa powder, try Green & Black's organic, which I personally love.  Bake as per instructions... 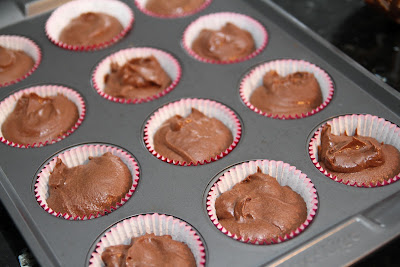 Once you've allowed your cupcakes to cool, you can add the marshmallow filling. I used the same batch I used for the Angel Food Cupcake. Also, here's how I core my cupcakes; no fancy gadgets, just a small fruit-corer. 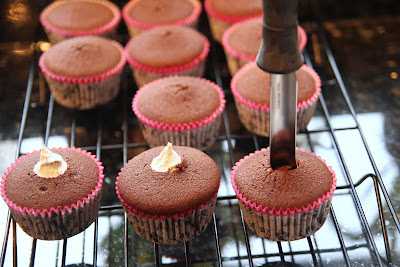 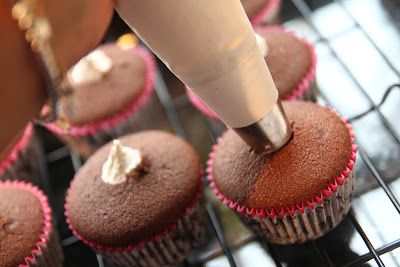 You can use whatever frosting you want, but I decided to use the fudge-y, ooey-gooey "Goldilocks <Filipino> Bakery" style chocolate frosting (or so my cousins say), which I discovered from a friend of a friend (@ Wokingham Cakes). 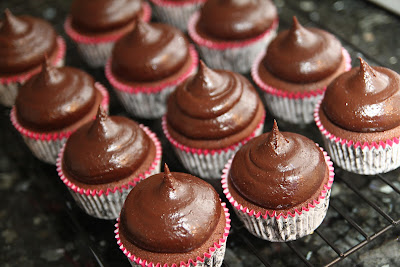 I made these devil's horn and tails from fondant, which I used to decorate the devils food cupcakes. 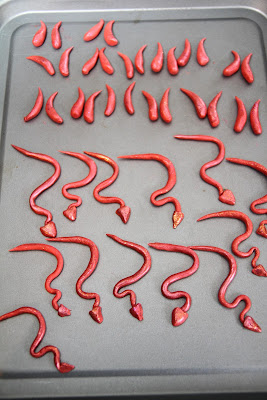 ...and here's what they look like on the inside: devilishly delicious! 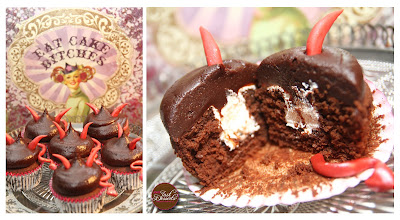 Hope you get to try and enjoy these recipes. You can find more of my recipes at www.jensjustdesserts.co.uk, or please visit me on Facebook.