For Goodness Sakes, Look At Those Cakes 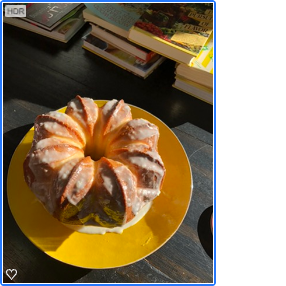 Two weeks ago, my friends Joa and Melissa’s suggested baking on Sundays. Last weekend was the Super Bowl, so we didn’t bake, but yesterday, we did. First I made a run to Kroger for White Lily Flour, white sugar, confectioners sugar and eggs.  Then I went over to Joa and Melissa's to bake.  We poured through cookbooks to find the right recipe for pound cake. Some recipe require so many eggs (six eggs and six egg yolks is too much). 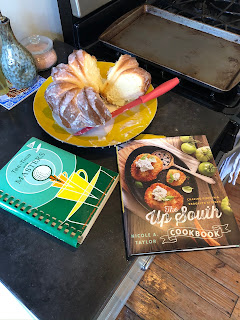 There’s an old cookbook from the Masters that had the perfect recipe. For the glaze, I employed Nicole Taylor’s recipe from her cookbook, The Up South Cookbook: Chasing Dixie in a Brooklyn Kitchen.  It was my first time using a silicone bundt pan, and I was fearful. I am used to greasing and flouring a cake pan. I was surprised at how well it turned out. The recipe instructions has the baking temperature at 300F which is low for baking cakes. The baking took over 90 minutes but it worked.